Did you feel the trillions of neutrinos that just flew through your body? Probably not, because these subatomic particles rarely interact with matter. Neutrinos can travel through a lightyear’s worth of lead without ever disturbing a single atom. Understanding these ghost-like particles could unlock mysteries of the universe, but how can scientists study neutrinos if they are seemingly undetectable?

Ironically, to study tiny neutrinos, scientists need massive experiments, like the MicroBooNE experiment at the U.S. Department of Energy’s (DOE) Fermi National Accelerator Laboratory. At the heart of MicroBooNE is a 170-ton liquid-argon time projection chamber (LArTPC), a type of detector that captures the signatures of neutrinos as they pass through a vat of frigid liquid argon kept at -303 degrees Fahrenheit.

Building an experiment that can operate at such extreme temperatures was no small feat, requiring the expertise of nearly 30 institutions. Scientists, engineers, and technicians from the U.S. Department of Energy’s Brookhaven National Laboratory played crucial roles in the development of MicroBooNE, from proposing the initial idea of the experiment to designing its mechanical structure and crafting cold microelectronics that live inside the LArTPC. But the effort wasn’t complete once MicroBooNE was operational.

Just like a personal computer requires software to be accessed, physicists need software to decipher the neutrino events captured by MicroBooNE’s LArTPC. That’s why a team of scientists from Brookhaven developed Wire-Cell, a software package that processes neutrino events and automatically reconstructs them in 3D.

Wire-Cell starts by processing 2D projective snapshots from the LArTPC into high-resolution images. Then, these images are “sliced” into several layers that correspond to a specific moment in time. By combining all the timestamped layers, Wire-Cell creates an interactive 3D model of the LArTPC data.

Building out the Wire-Cell components that produce these 3D renderings was a years-long effort. The project required Brookhaven scientists to solve a chain of technical challenges and create software tools entirely from scratch.

“When the first MicroBooNE image came out six years ago, the quality was not good enough to perform analyses, so we had to develop a whole set of image processing software just to improve the image quality,” said Chao Zhang, a leading member of the Wire-Cell team. “After that, we carried out the original concept of Wire-Cell: to build a 3D object based on 2D pictures. Then, we adjusted the software so it could identify interesting information from the original event, and that was the first time the Wire-Cell group finally saw a very clear neutrino interaction from the MicroBooNE detector.”

MicroBooNE’s exquisite sensitivity enables the experiment to capture elusive neutrino signals, but it also records many unwanted signals, such as those from cosmic rays. Brookhaven Goldhaber fellow Hanyu Wei led the Wire-Cell team in an effort to filter out these signals, leaving a clear picture of a neutrino event. But still, another challenge remained.

“Once Wire-Cell was able to isolate neutrino events, our new goal became to select a particular type of neutrino out,” said Xiangpan Ji, a post-doc in the Wire-Cell group. “Only about 0.5 percent of the events captured by the LArTPC are what we care about—the so-called electron-neutrino interaction. That’s the signal we’re after.”

Extracting this incredibly rare signal from a wealth of data is like searching for a needle in a haystack. To simplify the process, the Wire-Cell team added new tools to the software package, including a type of artificial intelligence called “deep learning.”

“The new tools are a set of software mostly focused on pattern recognition,” said Brett Viren, lead developer of the Wire-Cell toolkit. “The event we are looking for has a unique feature called an electromagnetic shower, which manifests as a particular topology.” First, the topology needs to look like an electron. Second, the topology needs to connect with the neutrino interaction vertex. Haiwang Yu, a post-doc in the Wire-Cell team, developed the deep learning algorithm to sort through all the possible candidates and locate these patterns.

The new capabilities added to Wire-Cell enabled MicroBooNE to achieve a remarkable 46% efficiency in selecting the electron-neutrino interaction signal with minimal background left in the image. This efficiency directly enabled the latest scientific finding from MicroBooNE, in which physicists announced the experiment detected no evidence of a “sterile neutrino.”

The latest MicroBooNE result, announced today by Fermilab follows up on an intriguing finding made by an earlier version of the experiment called MiniBooNE. MiniBooNE researchers detected an anomaly that hinted towards the existence of the sterile neutrino, a yet-to-be-discovered particle that is theorized to only interact with gravity. Discovering a sterile neutrino would lead to a paradigm shift in the Standard Model, the theory that physicists currently use to describe all the universe’s elementary particles and how they interact.

“Researchers at MiniBooNE observed anomalous events that could not be explained,” Qian said. “The previous detector that was used was unable to differentiate between electrons and photons, so that’s when the MicroBooNE experiment was proposed to dive deeper into this anomaly. Now, the MicroBooNE detector can distinguish between them using the LArTPC’s enhanced detection capabilities. As such, through four complementary analyses, the MicroBooNE collaboration determined that the data is consistent with the Standard Model.” The Wire-Cell team at Brookhaven Lab led one of the four analyses—the most sensitive analysis of the electron-neutrino interaction. Some components of the Wire-Cell toolkit were also used in the other three analyses.

In addition to following up on the results from MiniBooNE, MicroBooNE is serving as a steppingstone for a much larger neutrino experiment, the Deep Underground Neutrino Experiment (DUNE). Currently under construction, DUNE will consist of two detectors separated by 800 miles—one at Fermilab in Batavia, Illinois and a second, much larger detector at the U.S. Department of Energy’s Sanford Underground Research Laboratory in Lead, South Dakota. As an intense beam of neutrinos travels underground between these two detectors, researchers will study the particles’ behavior. Brookhaven Lab is also a leading collaborator on DUNE and the Wire-Cell team has kept this in mind from the start.

“We have always been aiming for DUNE as the final goal of our activities,” said Mary Bishai, a senior scientist at Brookhaven Lab. “Our work in MicroBooNE is currently state-of-the-art in the field of neutrino research and has moved us much closer towards the performance required to achieve the physics goals of DUNE.” Brookhaven post-docs Wenqiang Gu and Nitish Nayak are leading efforts to deploy and further develop Wire-Cell in DUNE.

In the meantime, MicroBooNE research is ongoing. Brookhaven continues to make key contributions to the experiment, including physics analyses on new findings.

Brookhaven National Laboratory is supported by the Office of Science of the U.S. Department of Energy. The Office of Science is the single largest supporter of basic research in the physical sciences in the United States and is working to address some of the most pressing challenges of our time. For more information, please visit science.energy.gov 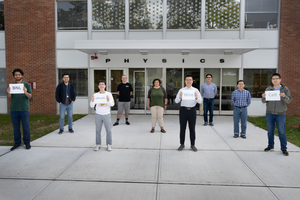