Los Angeles, CA (October 28, 2021) —You can’t spell ‘Smilodon fatalis’ without ‘fatal’, but researchers at La Brea Tar Pits may have found a softer side to saber-toothed cats along with a connection to our own feline and canine companions.

Published in Scientific Reports, a new study led by Dr. Mairin Balisi, Postdoctoral Fellow at La Brea Tar Pits, in collaboration with orthopaedic surgeons at Cedars-Sinai hospital, used 3D image reconstruction of external and internal bone morphology of a deformed Smilodon hip bone to reveal this saber-toothed cat suffered from hip dysplasia, suggesting a social structure that helped members survive to adulthood even when they couldn’t hunt for themselves due to this birth defect.

Part of the richness of La Brea Tar Pits’ collection are the fossils exhibiting signs of injury and disease–the more than 8,000 specimens that make up the pathology collection. These damaged bones are incredibly valuable for better understanding extinct animals’ behavior. For instance, the lower-back trauma found (and reported in an earlier article by Dr. Balisi) in many Smilodon vertebrae points to a hunting style that includes grappling with large Ice Age prey, like bison. For more than a century, paleontologists thought the massive destruction of the pelvis examined in this study was caused by trauma or infection that eventually led to the animal’s death, but a look inside the bone using modern medical technology told a different story.

Using computed tomography, the same technology common in hospitals (and veterinarian offices), the pelvis and matching thigh bone were scanned, and the resulting images were used to create 3D models of the inside of the bones. “To quote Roy Moodie in his 1930 study: this pelvis is ‘the most strikingly pathological object in the collection of Rancho La Brea fossils’. And so if we were to CT-scan a specimen–with CT being a resource-intensive method– then we had to start with this one,” says Dr. Balisi.

“Understanding the 3D shape of a skeleton is fascinating to me,” says co-author Dr. Robert Klapper, orthopaedic surgeon and sculptor. Seeing the sheer amount of skulls on the Tar Pits’ dire wolf wall over a decade ago led to talking his way into the collection. “When I saw the incredible display of bones at La Brea Tar Pits, I immediately asked to meet (then Collections Manager and study co-author) Chris Shaw. I asked him where were the abnormal joints that I knew must have existed. Chris took me to the stacks and showed me the three pelvises and one femur that he was studying. That’s when we decided to collaborate and began the analysis of the etiology of the end-stage degeneration of the saber-tooth hips.”

This scanned cat’s CAT scan upended the previous interpretation of its hip bones. After careful analysis of the bones’ internal structure, the team concluded that the damage wasn’t the result of an injury suffered on the hunt, but congenital hip dysplasia.

"Computed tomography (CT) was utilized by our research group to test hypothesized etiologies of hip degeneration in the Smilodon pelvis and femur bone specimens, as it allowed us to observe the anatomical distortions at a more granular level and create three-dimensional reconstructions to use in determining how well the pathology corresponded to that typically seen in bones subjected to many years of chronic remodeling,” says Dr. Abhinav Sharma, co-lead author and physician. “Additionally, from a medical standpoint, I am incredibly excited to share this study’s findings because it helps illuminate the utility of 3D reconstruction for the characterization of pathology in human bone specimens and highlights its potential for use in creation of patient-specific surgical implants and prostheses tailored for each individual’s unique anatomy."

Common in pet dogs and cats, the malformation of the hip bone’s ball and socket joints called hip dysplasia would have been extremely problematic for Smilodon. Smilodon’s impressive size meant that it needed to prey on megaherbivores like bison and camels to survive. Like living big cats, Smilodon needed strong hind limbs for speed, and from the initial leap to the subsequent grappling required to take down large prey, healthy hips would have been critical to their hunting strategy.

“In this case, our animal sustained a developmental condition (not an injury) and was able to live to adulthood–suggesting that it must have received support, perhaps by food-sharing with its family,” says Dr. Balisi.

Hobbled since it was a kitten, this individual could never have hunted or defended territory on its own. While a beloved labrador retriever might receive a hip replacement or careful pampering by human owners, a Smilodon would have been left to nature – and their saber-toothed family. This big cat’s survival to adulthood suggests that saber-toothed cats took care of one another.

“Social behavior is difficult to infer in fossils. Smilodon in particular is only distantly related to big cats today (like the distance between our house-cats and the African lion, if not greater),” says Dr. Balisi. “So we can't reconstruct Smilodon's sociality based on, say, living lions and tigers. Living big cats range in social structure anyway: the lion is the only one that's truly social, while tigers and jaguars tend to be solitary or even vary in sociality within a single species.”

“In Smilodon's case, we are lucky to have multiple lines of evidence–a lot of them from La Brea Tar Pits–suggesting that it was social,” Dr. Balisi says. “Thousands of individuals are preserved here, which is more likely if Smilodon had been social than solitary.” This isn’t the first sign of saber-tooth social behavior. In other Smilodon fossils, researchers have found signs of healing from grievous injuries that likely would’ve meant starving without support.  Dr. Balisi adds, “evidence from tooth and bone development also support Smilodon having had delayed weaning and extended family care–not just from here but also from other asphalt seeps globally, like Corralito in Ecuador.”

While we can never fully understand the social structures of extinct animals like Smilodon, computed tomography and digital data will continue to help diagnose their injuries, revealing more about how they lived and lived with each other.

“This study is a great example of how scientific knowledge evolves through the inclusion of new perspectives and technologies,” says Dr. Emily Lindsey, Assistant Curator and Excavation Site Director at La Brea Tar Pits. “People have been thinking about this bone for more than a century, but when you have a top medical facility literally just down the block from a world-famous fossil site it opens up whole new worlds of possibilities.”

About the Natural History Museums of Los Angeles County
The Natural History Museums of Los Angeles County (NHMLAC) include the Natural History Museum in Exposition Park, La Brea Tar Pits in Hancock Park, and the William S. Hart Museum in Newhall. They operate under the collective vision to inspire wonder, discovery, and responsibility for our natural and cultural worlds. The museums hold one of the world’s most extensive and valuable collections of natural and cultural history—more than 35 million objects. Using these collections for groundbreaking scientific and historical research, the museums also incorporate them into on- and offsite nature and culture exploration in L.A. neighborhoods, and a slate of community science programs—creating indoor-outdoor visitor experiences that explore the past, present, and future. Visit NHMLAC.ORG for adventure, education, and entertainment opportunities. 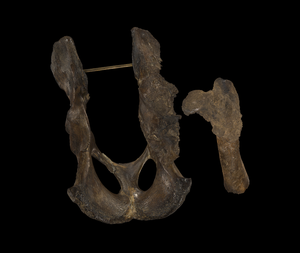 Three-dimensional scan of the pathological pelvis and femur 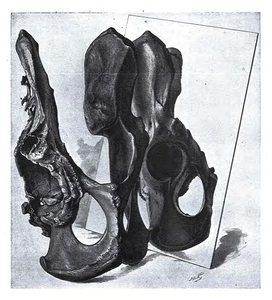