As you read these lines the highly sophisticated biological ‘machine’ that is your brain is at work. The human brain is made up of approximately 86 billion neurons and controls not only our bodily functions from vision to movement but also provides consciousness and understanding.

Despite its central importance the brain’s origins have not yet been uncovered. The first animal brains appeared hundreds of millions of years ago. Today, only the most primitive animal species, such as aquatic sponges, lack brains. Paradoxically, these species may hold the key to unlock the mystery of how neurons and brains first evolved.

Individual neurons in a brain communicate via synapses. These connections between cells lie at the heart of brain function and are regulated by a number of different genes. Sponges do not have these synapses, but their genome still encodes many of the synaptic genes. EMBL scientists asked the question why this might be the case. Their latest findings are published today in the journal Science.

“We know that these synaptic genes are involved in neuronal function in higher animals. Finding them in primitive species like sponges begs the question: if these animals don’t have brains, what is the role of these genes?” explained Detlev Arendt, EMBL Group Leader and Senior Scientist at EMBL Heidelberg. “As simple as that sounds, answering this question was beyond our technological abilities so far.”

To study the role of these synaptic genes in sponges, the Arendt lab established microfluidic and genomic technologies in the freshwater sponge Spongilla lacustris. Using these techniques, the scientists captured individual cells from several sponges inside microfluidic droplets and then profiled each cell’s genetic activity.

“We showed that certain cells in the sponge digestive chambers activate the synaptic genes. So even in a primitive animal lacking synapses, the synaptic genes are active in specific parts of its body,” said Jacob Musser, Research Scientist in the Arendt group and lead author on the study.

Sponges use their digestive chambers to filter out food from the water and interact with environmental microbes. To understand what the cells expressing synaptic genes do, the Arendt group joined forces with six EMBL teams as well as collaborators in Europe and worldwide. Working with EMBL’s Electron Microscopy Core Facility, Yannick Schwab’s team and Thomas Schneider's group operating synchrotron beamlines at EMBL Hamburg the researchers developed a new correlative imaging approach. “By combining electron microscopy with X-ray imaging on a synchrotron beamline we were able to visualize the stunning behaviour of these cells,” Dr Schwab explained.

The scientists captured three-dimensional snapshots of cells crawling throughout the digestive chamber to clear out bacterial invaders and sending out long arms that enwrap the feeding apparatus of specific digestive cells. This behaviour creates an interface for targeted cell-cell communication, as it also happens across synapses between neuronal cells in our brains.

“Our results point to the cells regulating feeding and controlling the microbial environment as possible evolutionary precursors for the first animal brains,” Dr Musser said. “Truly food for thought!”

More than a gut reaction 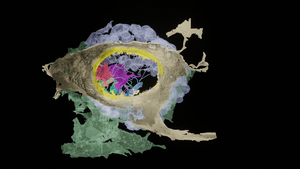