A study led by the University of Cambridge has found that periodic mass outbreaks of leaf-munching caterpillars can improve the water quality of nearby lakes - but may also increase the lakes’ carbon dioxide emissions.

Outbreaks of caterpillars of invasive gypsy moths, Lymantria dispar dispar, and forest tent caterpillar moths, Malacasoma disstria occur at least every five years in temperate forests. The insects munch through so many leaves that the resulting decrease in leaf-fall and increase in insect excrement has been found to alter the cycling of nutrients, particularly carbon and nitrogen, between land and nearby lakes on a huge scale.

Nitrogen-rich insect excrement, called frass, can wash into lake water and act as fertiliser for microbes, which then release carbon dioxide into the atmosphere as they metabolise. The researchers suggest that in outbreak years the large quantities of frass will favour the growth of greenhouse gas-producing bacteria in lakes at the expense of algae that remove CO2 from the atmosphere.

“These insects are basically little machines that convert carbon-rich leaves into nitrogen-rich poo. The poo drops into lakes instead of the leaves, and this significantly changes the water chemistry - we think it will increase the extent to which lakes are sources of greenhouse gases,” said Professor Andrew Tanentzap in the University of Cambridge’s Department of Plant Sciences, senior author of the paper.

Northwards range expansion and increased insect population growth is anticipated as the climate changes. This puts northern forests at increased risk of defoliator outbreaks in the future, potentially causing greater quantities of CO2 to be released from nearby lakes.

This northwards shift is also concerning because there are more freshwater lakes further north. And climate change is also expected to favour broadleaved deciduous trees around the lakes, which will amplify the effect of the insects.

The study found that in years with insect outbreaks, the leaf area of forests was reduced by an average of 22%. At the same time, nearby lakes contained 112% more dissolved nitrogen and 27% less dissolved carbon compared to non-outbreak years. The effects were greatest when lake catchments contained higher proportions of deciduous broadleaved trees, such as oaks and maples, which the caterpillars favour over coniferous trees like pines.

To get their results, researchers combined 32 years of government data from insect outbreak surveys and lake water chemistry in 12 lake catchments across Ontario, Canada, and satellite remote sensing data on forest type and monthly leaf area cover. The results are published today in the journal Nature Communications.

This is believed to be the most extensive study ever undertaken into how insect outbreaks impact freshwater carbon and nitrogen dynamics. Previous studies have been so small that it has been difficult to extract wider generalities.

A previous 26-year study of 266 lakes across the northern hemisphere has shown that carbon is naturally accumulating in these lake waters, in a process called browning. The trend is attributed to a variety of factors including climate change, and recovery from historical acid rain and logging activities. Comparing the new results to this data showed that an outbreak of leaf-munching caterpillars can effectively offset an entire year’s worth of carbon accumulation in nearby lakes – significantly improving water quality.

In years without outbreaks of leaf-eating insects, carbon and nitrogen entering lakes usually comes from decaying leaf and needle litter, and peaks in quantity in autumn. In outbreak years, the study found that nearby freshwater lakes contained an average of 27% less dissolved carbon.

“Outbreaks of leaf-eating insects can reduce the carbon dissolved in lake water by almost a third when the trees around the lake are mainly deciduous. It’s just amazing that these insects can have such a pronounced effect on water quality,” said Sam Woodman, a researcher in the University of Cambridge’s Department of Plant Sciences and first author of the report. 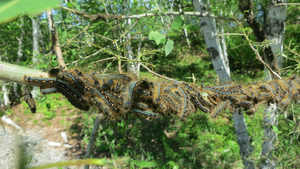 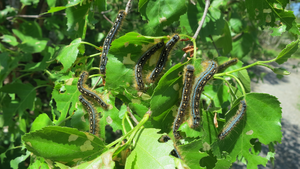 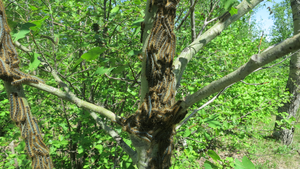