Researchers at the University of British Columbia (UBC) and BC Cancer, in partnership with BC Children’s Hospital Research Institute (BCCHR), have developed a new test to more easily diagnose medulloblastoma, the most common malignant childhood brain tumour.

The test—which can distinguish between extremely high-risk medulloblastoma cases that need radiation therapy from those that are lower-risk and do not need radiation—could help pave the way for personalized treatment options for children suffering from the disease.

“With this new test, more doctors may one day be able to identify children with the most aggressive forms of medulloblastoma and better tailor treatment,” says the study’s senior author, Dr. Poul Sorensen, professor of pathology and laboratory medicine at UBC’s faculty of medicine, distinguished scientist at BC Cancer, and associate member at BCCHR.

According to the researchers, right now only sophisticated and expensive tests conducted in a handful of labs around the world can identify children with the most aggressive forms of the disease, which forms in the cerebellum, the posterior part of the brain.

The new test—developed in Dr. Poul Sorensen’s laboratory at the BC Cancer Research Institute—relies on an antibody-based technique called immunohistochemistry, which is widely available in clinical laboratories around the world.

“By using a technique that is available in virtually all clinical labs, our new test has the potential to improve the diagnosis and future treatment of medulloblastoma for children in almost every corner of the planet,” says the study’s lead author Dr. Alberto Delaidelli, MD and UBC PhD candidate in Dr. Sorensen’s lab.

They then screened for the expression of this protein in approximately 400 medulloblastoma samples and found that tumours where this protein was readily detectable were significantly more likely to display aggressive behavior and to relapse.

“These days, researchers often go from simpler techniques to extremely complicated ‘omics’ techniques as part of their research efforts to make clinically-relevant observations,” says Dr. Delaidelli. “Instead, we used a bit of ‘reverse engineering,’ working backwards by analyzing very complicated data sets to develop a technique that can be performed in virtually all clinical labs worldwide.”

The study, recently published in Clinical Cancer Research, is the result of a collaboration between researchers in Vancouver, Toronto, Philadelphia, Heidelberg and Moscow.

The research groups are now testing the performance of the test in a clinical trial, working in collaboration with colleagues in Germany and other parts of the world. 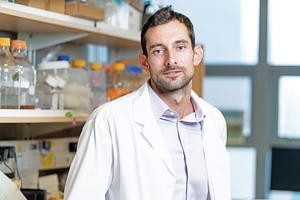