New findings concerning the ~420-million-year-old fossil Nochelaspis maeandrine found in Qujing have helped unveil the mystery of the largest known eugaleaspiform, according to researchers from the Institute of Vertebrate Paleontology and Paleoanthropology (IVPP) of the Chinese Academy of Sciences.

Their study was published in Vertebrata PalAsiatica as a cover story.

In 1987, ZHU Min, a paleoichthyologist from IVPP, found a complete galeaspid headshield in Qujing. He named it Nochelaspis maeandrine in Vertebrata PalAsiatica. The generic name derived from its large charmingly naive headshield, while its specific name meant roaming in the water for food.

"Over the past 30 years, we've been trying to find new fossils of N. maeandrine. But it is impossible to carry out excavation, since the south gate of Qujing, where the fossil site is located, has become a cultural site," said GAI Zhikun, an associate researcher at IVPP and corresponding author of the study.

Fortunately, the researchers found a previously unnoticed specimen of N. maeandrine among the specimens collected by ZHU Min in 1987. In 2018, they also found another nearly complete headshield from the Xishancun Formation near the Miandian Reservoir, where a large amount of dark grey siltstone piled up along with the construction of a tunnel through the Liaokuo Hill.

These new findings helped the researchers obtain morphological information from the ventral side of the headshield of N. maeandrine.

The two new specimens redefined the characteristics of N. maeandrine, including its triangular headshield, slit-like median dorsal opening (length/width > 6) with a sawtooth-like edge, dermal ornamentations composed of coarse stellate tubercles, and a more robust inner cornual process with the posterior end far beyond the posterior margin of the cornual process.

Moreover, the new specimens have unraveled the mystery of the ventral side of the headshield in N. maeandrine for the first time. The headshield curves ventrally to form a flat ventral rim, embracing a large pear-shaped oralobranchial fenestra. The branchial fenestra is covered by a ventral plate.

"The new evidence suggests that the pouch-like gills of N. maeandrine open to the exterior ventrally by six separated, large, and circular branchial openings," said MENG Xinyuan, the first author of the study.

The external branchial openings or slits are distributed on both sides of the body in extant lampreys, hagfishes, and most jawed fishes. By contrast, the branchial openings of N. maeandrine are located ventrally, as in modern rays, which indicates a benthic lifestyle dwelling on sandy or muddy substrates in a quiet marine environment. 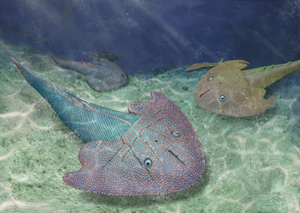