Recently, organic–inorganic halide perovskite (OIHP) solar cells have become one of the most appealing research topics. Due to their ionic nature, intrinsic defects, such as vacancies and non-coordinated ions at their grain boundaries (GBs) and surfaces, remain one of the interesting material characteristics that underpin limitations in device operation and restrict further progress towards the theoretical limit. Previously, traditional passivation methods, like coordinate bonding or ionic bonding, have been proposed to neutralize and de-activate deep level traps. Besides, the coupling between plasmonic nanostructures and semiconductor materials is considered as an effective strategy to solve some inherent problems in traditional semiconductor materials. Through the decay of localized surface plasmon resonances in metallic nanostructures, the energy stored in a surface plasmon can be transferred either via a radiative path or a nonradiative path by generating hot carriers. However, report of introducing plasmonic nanostructures into perovskite polycrystalline films for improving their optoelectronic characteristic is rare, and the role of plasmonic nanostructures in perovskite solar cells is still controversial. The reason is due to two aspects: firstly, the high light absorption coefficient of perovskite materials basically requires no additional light absorption enhancement. Secondly, the bare metal nanostructures tend to act as the recombination centre of free charge, while the coated metal nanostructures will reduce the efficiency of energy transfer.

In a new paper published in Light Science & Application, a team of scientists, led by associate professor Kai Yao of Nanchang University, professor Haitao Huang of Hong Kong Polytechnic University, and associate professor Dangyuan Lei have designed a novel core-shell plasmonic metal nanostructure to greatly enhance their coupling with perovskite material, and based on this scheme, researchers reveal that plasmon-induced hot carriers generated in metals can effectively fill the deep level trap states of perovskite material at the grain boundaries.

The researchers firstly synthesised ~20 nm gold nanospheres by citrate reduction and then coated them with a ~2 nm conductive polyaniline (PAT) layer. The core-shell nanostructures (Au@PAT) can be well dispersed in the perovskite precursor solution (Figure 1a). Researchers found that Au@PAT are enriched at the grain boundaries of perovskite film (Figure 1b). By comparing the photovoltaic properties of MAPbI3 devices doped with Au@PAT (Target) and PAT (Control), the researchers find that the PCE of devices doped with Au@PAT increased by 20%. Besides, they also find the incorporation of this core-shell metal nanoparticles is a universal strategy. When these plasmonic nanoparticles are incorporated into double-cation or multi-cation perovskite films, the device performance is also significantly improved. In addition to an increase in photo-generated current, significant improvements in open circuit voltage and filling factor are also observed. Excluding the change of crystallization characteristics, the improvement in device performance is mainly attributed to the improved electrical properties of the perovskite film. The results of PL mapping and scanning near-Field optical microscope (SNOM) (Figure 1c and 1d) reveal that the defects at GBs of the perovskite polycrystalline film are significantly passivated after the addition of Au@PAT. Moreover, the PL intensity of the whole perovskite film is increased and become more uniform. In addition, the electric field intensity at the grain boundary is also significantly improved after the incorporation of Au@PAT at the GBs.

What is the underlying mechanism for this enhancement? To answer this question, the researchers tested the variation of defect concentration in perovskite devices before and after Au@PAT doping under both illumination and dark states. As shown in Figure 1e and 1f, compared to “control” devices, there is significant difference in carrier behaviour Au@PAT doped perovskite films in dark and light condition, confirming that the related defect filling is induced by plasmonic effect, not just the nanostructure itself. Under illumination, the relatively positive local changes in photophysics are consistent with the results derived from the GB regions on the microscopic level, playing a critical role in the reduction of deep trap densities. It manifests that the deep-level trap occupation induced by Au@PAT may lead to a longer charge carrier lifetime and lower SRH recombination rate in the device that enhances the FF and VOC.

In order to further understand the mechanism of Au@PAT passivation of defects, transient absorption spectroscopy (TA) was applied to analyse the dynamic process of carrier recombination in perovskite devices. The TA results identify the possibility of plasmon-induced hot carrier transfer from plasmonic nanoparticles to the conduction band of MAPbI3. The wavelength dependence of photo-induced absorption (PIA) signals further supports the process. The transfer of thermal electrons from metal Au to perovskite was further analysed using density functional theory (DFT) calculations (Figure 2a-c). The results show that the PAT shell is crucial to ensure the strong coupling between plasmonic and perovskite materials. In this case, hot carriers generated in metals can be transferred from the plasmonic nanostructure into the perovskite material quickly and efficiently, thus filling the deep level defect of the perovskite material at the GBs (Figure 2d). Although this primary investigation is not exhaustive in terms of all possible contribution and direct observation of deep-trap filling in PSCs, it does highlight the effect of plasmonic resonances on metal/perovskite heterostructure.

In summary, selection of appropriate materials and design of optimized plasmonic coupling are in urgent need to control these interfacial effects for realizing the high-performance perovskite devices, which invites future intense research activities. 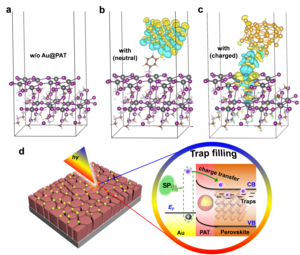