Management of within-group conflict is a key feature of human lives and those of many social animals, with contestants known to adopt various strategies in the immediate aftermath to minimise costs. The study, published today in the journal eLife by a team at University of Bristol, shows that individuals not involved in the altercations can both track the aggressive behaviour of others and act on that information at a later time.

Lead author Dr Amy Morris-Drake, from Bristol’s School of Biological Sciences, said: “Conflict management strategies have evolved to keep the peace in species as varied as chimpanzees, ravens and domestic dogs. Our work demonstrates that dwarf mongooses have sufficient cognitive ability to monitor vocal cues about aggressive interactions and to remember who the bullies are, refusing to groom with them later.”

By working with wild groups of mongooses habituated to their close presence, the research team could collect detailed observations and test their ideas experimentally in natural conditions.

Co-author Dr Julie Kern, now based at the University of New England, Australia said: “The crucial experiment entailed simulating the occurrence of food contests between two group members during the afternoon, through playback of the vocalisations given by aggressors and victims. The rest of the group therefore heard what sounded like repeated squabbles involving these individuals.”

Senior author Prof. Andy Radford, also from Bristol, added: “On experimental days, we recorded all the grooming that individuals engaged in with their groupmates back at the sleeping burrow that evening. Being groomed helps with hygiene and reduces anxiety, and grooming underpins social relationships, so is core to social life.”

On evenings that followed the simulation of increased within-group conflict, subordinate mongoose group members groomed with one another more than on control evenings. Most strikingly, the subordinates also ignored the perceived aggressors, who received substantially less grooming than on other occasions.

Dr Morris-Drake said: “This shows that dwarf mongooses keep tabs on conflict occurring between their groupmates. They can identify bullies just from the vocalisations given during disputes, store this information and implement a delayed conflict-management strategy, in this case giving the bully the cold shoulder before bedtime.”

The findings are important because it is often suggested that it is difficult for animals to remember past altercations between groupmates, only to act on them later, particularly when the individual was not involved in the interaction and with everyday life continuing in the interim.

Dwarf mongooses are Africa’s smallest carnivore, living in cooperatively breeding groups of 5–30 individuals. The work was conducted as part of the Dwarf Mongoose Research Project which has studied habituated wild groups continuously since 2011. The study animals are individually marked with blonde hair dye, are trained to climb onto a balance scale to weigh themselves, and can be watched from a few feet away as they go about their natural behaviour in ecologically valid conditions. 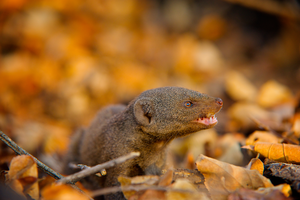 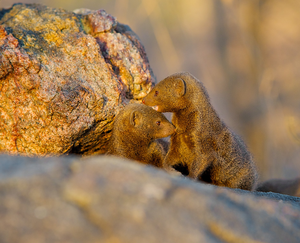