Researchers at Tel Aviv University, under the leadership of Dr. Yuqin Zhang and Prof. Eilon Shani of the School of Plant Sciences and Food Security at the George S. Wise Faculty of Life Sciences, discovered a central mechanism in plants that helps them deal with drought conditions and water shortages. The system is built on proteins that transport a small signal molecule that controls two vital processes: closing leaves’ stomata to prevent water loss and regulating lateral roots growth and development to better respond to abiotic stresses such as high salinity or drought conditions.

Researchers from the Tel Aviv University and the Weizmann Institute as well as from Switzerland, Germany, the US, and Denmark conducted the multi-stage study over six years. The article was published in the journal, Science Advances.

Prof. Shani: “Understanding plant responses to their changing environment is very important during this age of rapid climate changes and has great significance for the crops that feed humanity. It has long been known that one way that plants respond to a shortage of water is by closing their stomata - small openings surrounded by two guard cells on the leaves that enable exchanges with the environment. When these stomata are open, gas exchange increases, the photosynthesis process is accelerated, and the plant generates energy, grows, and bears fruit. But, when the plant seeks to retain the little water available to it, it closes its stomata and reduces transpiration. This is a particularly sensitive and rapid process through which the plant maintains the proper balance at any given moment. It opens or closes stomata within seconds to minutes in response to any small change in water availability, temperature, and the amount of light.”

According to researchers, it was already discovered in the 1960s that a plant hormone called ABA (abscisic acid) – a small signal molecule –  leads to stomatal closure. When a high level of ABA is present, the stomata tends to close, and, conversely, in its absence, they open. The prevailing belief for years was that ABA is produced in the roots in response to water deficit in the soil and then transported through the stem to the leaves in order to close the stomata. In the current study, researchers examined this hypothesis and found that the reality is far more complex.

Prof. Shani: “During the course of the study, which took six years, we relied on the plant model Arabidopsis from the Brassicaceae family and used a broad variety of advanced molecular genetics techniques: creating mutations through genome editing, cell-type-specific gene activation, physiological characterizations using advanced equipment.. Similarly, we used a combination of advanced microscopes and different chemical and genetic methodologies for fluorescent probing in order to find the exact location of ABA molecules in plants as well as the proteins involved.”

The findings were surprising: Researchers discovered that the ABA signal molecule is stored in an inactive state in the leaves themselves, in cells called mesophylls, which have a central role in photosynthesis. The storage process is actively carried out by two transporter proteins that had been previously unknown, ABCG17 and ABCG18. They transfer the ABA through the cell's membrane into the mesophyll cells. There, the ABA becomes inactive by binding to a sugar molecule and is stored over time.

In order to examine the function of these two newly discovered proteins, researchers created various mutations in the respective genes that produce them and conducted a variety of additional experiments that characterized the proteins’ ABA transport activities with different systems such as frog eggs and yeast cells. They found that changes in the production of these proteins and their activities cause fluctuations in the transport and storage of ABA molecules in the plant and that without these proteins, ABA remains free, reaches the stomata in high concentrations, and promotes their closure. According to the researchers, this mechanism allows plants to rapidly respond to changing environmental conditions. Specifically, when the plant senses drought, the quantity and activity of these two proteins decreases, ABA “awakens from its dormancy,” and the stomata close within a short amount of time.

Researchers further found that the long-distance movement of the ABA hormone in a plant is the opposite of what they had believed up until now. Using the plant vasculature bundles, which is equivalent to the human blood system, ABA travels over great distances – in fact from the leaves to the roots. This movement is also controlled by the transport proteins, ABCG17 and ABCG18. A decrease in the activity of these two proteins in a leaf causes a reduction in the storage of dormant ABA in the mesophyll cells, and the free ABA travels in the direction of the root. Accumulation of ABA in the roots controls the development of lateral roots that helps the plant to better respond to abiotic stresses.

Prof. Shani concluded, “In this study, we have added an important stratum in our understanding of the mechanism through which the plant deals with changing conditions such as water shortfalls. For the first time, we discovered a control mechanism through which the plant collects signal molecules in a ‘storeroom’ and releases them under the desired conditions. This discovery will significantly contribute to agriculture during this era of rapid climate change and thus hopefully improve world food supply.” In follow-up studies, we are now examining similar mechanisms in two important crops: tomatoes and rice.” 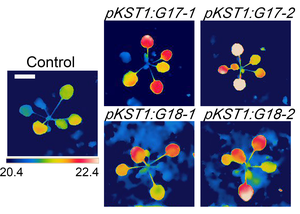 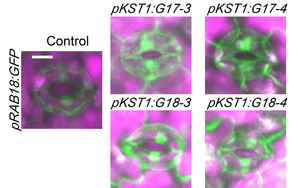