Warm circumpolar deep waters flowing toward the Antarctic continental shelf were recently identified as causing ice shelf melting on the eastern half of the continent, not just in the west. But the precise mechanism of transport of these warm water flows from further offshore has until now remained unknown.

Japanese scientists from the National Institute of Polar Research have now however identified the cause as large, semi-stationary eddies off the Wilkes Land coast whipping the water poleward, a finding that should lead to more accurate predictions of global sea-level rise.

The findings were published in the journal Communications Earth and Environment on August 6.

This ice discharge into the sea, the largest in the eastern part of the continent, comes from the Totten Glacier, a colossal volume of ice that sits atop the southern continent’s land mass. The similarly named Totten Ice Shelf meanwhile is a block of ice connected to and buttresses the Totten Glacier, but floats atop the sea rather than sitting atop the land. The ice shelf works as a sort of ‘plug’ that normally prevents the Totten Glacier, and the expansive ice in the Aurora Subglacial Basin behind it, from sliding into the ocean. If the plug were removed via melting, this could increase sea levels by more than 3.5 meters (11 feet).

Worryingly, the point at which the Totten Glacier touches the sea (its ‘grounding line’) lies far below sea level, which means that a cavity of water can open up between the continental shelf and the underside of the ice shelf, and even under parts of the glacier itself. This makes both of them vulnerable to melting if oceanic heat flows into this underside cavity (so-called ‘basal melting’).

In the Southern Ocean that surrounds Antarctica, the strongest source of such oceanic ‘thermal forcing’ right across the continent is the warm Circumpolar Deep Water (CDW). The CDW is a product of a mixture of warm, relatively deep and salty waters flowing into it from the rest of the planet’s oceans and sits beneath a layer of colder, less salty surface waters. It is in turn drawn from the intermediate depths of the much larger Antarctic Circumpolar Current (ACC) further offshore and that swirls around the southern continent. It is thought that changes in the flows of warm CDW towards the continental shelf has an impact on this worrisome basal melting.

For some time, it was not thought that East Antarctica was as vulnerable to basal melting, as the continental shelf in the east is typically occupied by colder waters than the west.

However, recent hydrographic observations (measurements of water properties from ocean surface to bottom) have revealed warm inflows of CDW at the ice fronts of the Totten Ice Shelf (and those of the Shirase Glacier Tongue elsewhere in East Antarctica) as well. These measurements are also consistent with satellite observations of high basal melt rates for these regions. Taken together, these data are ﬁrm observational evidence of a warm ocean–cryosphere interaction beneath the ﬂoating Totten Ice Shelf (and the Shirase Glacier Tongue), which is otherwise unusual in East Antarctica.

But the precise mechanisms of how the offshore-origin warm CDW flows are transported from the ACC to the continental slope and the cavity beneath the Totten Ice Shelf have until now remained something of a mystery.

So the researchers carried out hydrographic observations at the continental slope and where the shelf begins to break up, but more closely spaced ones this time, and then combined this with ocean circulation data from satellites. These data when combined showed that there were cyclonic eddies of water that are semi-stationary off the Sabrina Coast of Wilkes Land and work to whip the warm waters poleward.

“The warm CDW circulation from the offshore ACC to the shelf break appears akin to an intricate ‘highway junction’ with some ‘fueling stations’ provided by multiple eddies off the Totten Ice Shelf on the Sabrina Coast,” said Daisuke Hirano, an assistant Professor at National Institute of Polar Research and a lead researcher involved with the study.

Having identified the mechanism for transport of warm offshore waters poleward, the team now wants to extend their analysis to understanding the interaction between these ocean waters and the ice directly at the underside of the Totten Ice Shelf. Taken together, this should assist the development of better predictions of global sea-level rise. 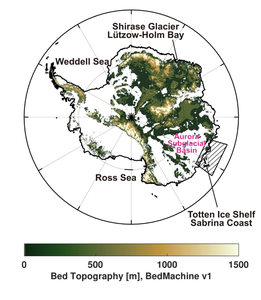 The latest bed topography over the Antarctic Continent