COLUMBIA, Mo. – Move over, Hollywood — science fiction is getting ready to leap off the big screen and enter the real world. While recent science fiction movies have demonstrated the power of artificially intelligent computer programs, such as the fictional character J.A.R.V.I.S. in the Avenger film series, to make independent decisions to carry out a set of actions, these imagined movie scenarios could now be closer to becoming a reality.

In a recent study published in Nature Communications, a journal of Nature, researchers at the University of Missouri and University of Chicago have developed an artificial material, called a metamaterial, which can respond to its environment, independently make a decision, and perform an action not directed by a human being. For example, a drone making a delivery might evaluate its environment including wind direction, speed or wildlife, and automatically change course in order to complete the delivery safely.

Some examples of these natural materials include the quick reaction of a Venus fly trap’s leafy jaws to capture an insect, chameleons changing the color of their skin to blend into their surroundings, and pine cones adjusting their shapes in response to changes in air humidity, Huang said.

“Basically, we are controlling how this material responds to changes in external stimuli found in its surroundings,” Huang said. “For example, we can apply this material to stealth technology in the aerospace industry by attaching the material to aerospace structures. It can help control and decrease noises coming from the aircraft, such as engine vibrations, which can increase its multifunctional capabilities.”

The material uses a computer chip to control or manipulate the processing of information that’s needed to perform the requested actions, then uses the electrical power to convert that energy into mechanical energy. The researchers’ next step is to implement their idea in a real-world environment.

“Realization of active metamaterials with odd micropolar elasticity,” was published in Nature Communications. Co-authors include Yangyang Chen and Xiaopeng Li at MU and Colin Scheibner and Vincenzo Vitelli at the University of Chicago.

An artificial material that can sense, adapt to its environment 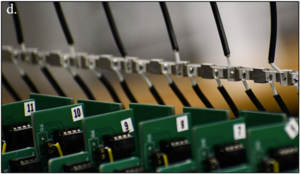