PROVIDENCE, R.I. [Brown University] — Around 12,000 years ago, something scorched a vast swath of the Atacama Desert in Chile with heat so intense that it turned the sandy soil into widespread slabs of silicate glass. Now, a research team studying the distribution and composition of those glasses has come to a conclusion about what caused the inferno.

In a study published in the journal Geology, researchers show that samples of the desert glass contain tiny fragments with minerals often found in rocks of extraterrestrial origin. Those minerals closely match the composition of material returned to Earth by NASA’s Stardust mission, which sampled the particles from a comet called Wild 2. The team concludes that those mineral assemblages are likely the remains of an extraterrestrial object — most likely a comet with a composition similar to Wild 2 — that streamed down after the explosion that melted the sandy surface below.

“This is the first time we have clear evidence of glasses on Earth that were created by the thermal radiation and winds from a fireball exploding just above the surface,” said Pete Schultz, a professor emeritus in Brown University’s Department of Earth, Environmental and Planetary Sciences. “To have such a dramatic effect on such a large area, this was a truly massive explosion. Lots of us have seen bolide fireballs streaking across the sky, but those are tiny blips compared to this.”

The glasses are concentrated in patches across the Atacama Desert east of Pampa del Tamarugal, a plateau in northern Chile nestled between the Andes Mountains to the east and the Chilean Coastal Range to the west. Fields of dark green or black glass occur within a corridor stretching about 75 kilometers. There’s no evidence that the glasses could have been created by volcanic activity, Schultz says, so their origin has been a mystery.

Some researchers have posited that the glass resulted from ancient grass fires, as the region wasn’t always desert. During the Pleistocene epoch, there were oases with trees and grassy wetlands created by rivers extending from mountains to the east, and it’s been suggested that widespread fires may have burned hot enough to melt the sandy soil into large glassy slabs.

But the amount of glass present along with several key physical characteristics make simple fires an impossible formation mechanism, the new research found. The glasses show evidence of having been twisted, folded, rolled and even thrown while still in molten form. That’s consistent with a large incoming meteor and airburst explosion, which would have been accompanied by tornado-force winds. The mineralogy of the glass casts further serious doubt on the grassfire idea, Schultz says. Along with researchers from the Fernbank Science Center in Georgia, Chile’s Universidad Santo Tomás and the Chilean Geology and Mining Service, Schultz and colleagues performed a detailed chemical analysis of dozens of samples taken from glass deposits across the region.

The analysis found minerals called zircons that had thermally decomposed to form baddeleyite. That mineral transition typically happens in temperatures in excess of 3,000 degrees Fahrenheit — far hotter than what could be generated by grass fires, Schultz says.

The analysis also turned up assemblages of exotic minerals only found in meteorites and other extraterrestrial rocks, the researchers say. Specific minerals like cubanite, troilite and calcium-aluminum-rich inclusions matched mineral signatures from comet samples retrieved from NASA’s Stardust mission.

“Those minerals are what tell us that this object has all the markings of a comet,” said Scott Harris, a planetary geologist at the Fernbank Science Center and study co-author. “To have the same mineralogy we saw in the Stardust samples entrained in these glasses is really powerful evidence that what we’re seeing is the result of a cometary airburst.”

More work needs to be done to establish the exact ages of the glass, which would determine exactly when the event took place, Schultz says. But the tentative dating puts the impact right around time that large mammals disappeared from the region.

“It’s too soon to say if there was a causal connection or not, but what we can say is that this event did happen around the same time as when we think the megafauna disappeared, which is intriguing,” Schultz said. “There’s also a chance that this was actually witnessed by early inhabitants, who had just arrived in the region. It would have been quite a show.”

Schultz and his team hope that further research may help to constrain the timing and shed light on the size of the impactor. For now, Schultz hopes this study may help researchers identify similar blast sites elsewhere and reveal the potential risk posed by such events.

“There may be lots of these blast scars out there, but until now we haven’t had enough evidence to make us believe they were truly related to airburst events,” Schultz said. “I think this site provides a template to help refine our impact models and will help to identify similar sites elsewhere.”

Other authors of the study were Sebastian Perroud, Nicolas Blanco and Andrew Tomlinson.

Widespread glasses generated by cometary fireballs during the late Pleistocene in the Atacama Desert, Chile 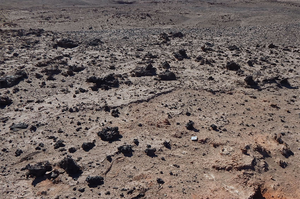 Glasses strewn across the desert 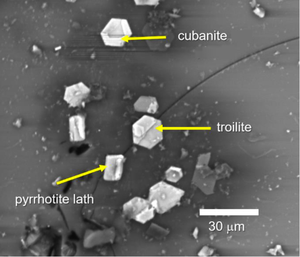