Wildlife scientists from research organisations across Australia, including from the University of Adelaide, have come together to call for urgent reforms to the management of Australia’s kangaroo populations.

This is in response to an overabundance of kangaroos and wallabies (macropods) resulting in the degradation of habitats of cohabiting species and the starvation of hundreds of thousands of kangaroos.

In a landmark special edition of Ecological Management and Restoration, the scientists, joined by landholders and public land managers, describe the animal and human welfare legacies of millions of kangaroos dying in dry times because their populations had not been managed sustainably or ethically.

This special edition of the journal will serve as a resource describing the risks and solutions for what is now openly recognised as a major ‘wicked issue’ for the animal welfare, conservation, Aboriginal and farming communities.

Ecologist Dr John Read from the University of Adelaide’s Department of Ecology and Evolutionary Biology, a guest editor as well as a contributing author, said: “We were bombarded with case studies where overabundant kangaroos represented the main threat to revegetation and conservation programs, including examples where unchecked increases threatened the survival of wildlife species, including the macropods themselves.”

Western Division (NSW) grazier Leon Zanker wrote, “The widely accepted boom/bust cycle that has seen millions of kangaroos starve to death or smashed on our roads has in my view, totally unacceptable animal welfare, social and environmental outcomes and shows absolute disrespect for our national icon.”

Across the 25 research papers featured, the scientists also describe advances in the way that kangaroos are, or should be, monitored and managed to improve animal welfare, conservation and production values.

Associate Professor Graeme Coulson from the University of Melbourne, a member of the guest editorial panel and author of several papers, said: “In some localised cases fertility treatment can keep isolated kangaroo populations in check, but in many cases lethal control is required to maintain appropriate grass resources for the health of kangaroos, and conservation of other wildlife and threatened plants”.

Associate Professor Coulson and other authors described how best to survey kangaroo numbers and how to prioritise management actions to limit welfare impacts to all kangaroos (especially joeys).

The Edition also features a ‘Joint Statement’ endorsed by 25 ecological, conservation, animal welfare and Aboriginal organisations calling for scientifically-informed reforms to limit what the authors say is “the waste, degradation and suffering that results from ineffective, and sometimes counterproductive policies.”

“These peak bodies recognise that sensitively managing kangaroos, including in some cases harvesting them as a resource, is preferable to either treating them as pests or ignoring their plight altogether,” said Dr Jim Radford from La Trobe University, another guest editor..

The authors and the peak bodies are united in calling for a paradigm shift, where kangaroos are again respected as superbly-adapted Australian cultural and biological icons. 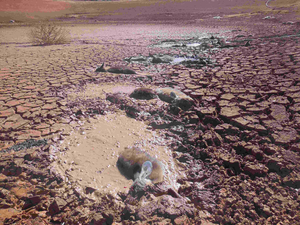 Kangaroos bogged in a dam