Over the past few decades, the annual average temperature in the Arctic has increased almost twice as fast as it has elsewhere in the world. Although the main driver of this warming is the global increase in the concentration of carbon dioxide, various climate forcers and feedback processes amplify Arctic warming. Black carbon (BC) aerosols in the Arctic have been attracting attention as a climate forcer that accelerates this warming.

BC emitted into the atmosphere by fossil fuel combustion and biomass burning efficiently absorbs solar radiation and heats the atmosphere. Furthermore, BC deposited on snow and ice can reduce their reflectivity and accelerate their melting. Most of the Arctic BC is believed to be transported from regions outside the Arctic. However, estimates of the relative contribution by a variety of sources to Arctic BC, and thus of BC’s climate impact, still have considerable uncertainties.

The research group measured vertical profiles of BC mass concentrations up to 5 km high in the Arctic in March-April 2018, during the Polar Airborne Measurements and Arctic Regional Climate Model simulation Project (PAMARCMiP) led by the Alfred Wegener Institute (AWI) in Germany. The observations were carried out using the AWI research aircraft Polar 5, and Station Nord (81.6°N, 16.7°W) as the operation base. Observed BC mass concentrations were compared with those obtained in past spring Arctic aircraft experiments (ARCTAS in 2008, HIPPO in 2010, and NETCARE in 2015) with the aim of identifying factors responsible for the year-to-year variation in BC abundance. See Figure 1.

Black carbon mass concentrations in 2018 were between 7 and 23 nanograms per cubic metre (ng m–3), which were comparable to those in 2010 (Fig.1 (left)). On the other hand, systematically higher values were observed in 2008 and 2015 at all altitudes up to 5 km. Even though each aircraft measurement was made over a limited area and time duration, these results reveal a significant year-to-year variation in BC mass concentrations in the Arctic spring.

The research group found that relative changes in the year-to-year variation of “vertically integrated BC mass concentrations” – that is, the amount of BC in columns between 0 and 5 km altitudes – was generally consistent with that in biomass burning activities estimated using MODIS satellite-derived fire counts detected at latitudes north of 50ºN (Fig. 1 (right)). Transport of air influenced by biomass burnings in regions between latitudes 45–60°N and longitudes 30–50°E and 100–130°E (western and eastern Eurasia, respectively) were likely responsible for the observed increase in BC levels during the Arctic spring.

During PAMARCMiP in 2018, a pollution layer, whose sources were likely to be biomass burnings in the mid-latitudes, was occasionally visible through the windows of the research aircraft (Fig. 2). It is likely that more frequent transport of pollution from biomass burning to the Arctic had occurred during the observation periods in 2008 and 2015. See Figure 2.

Significance of the results

Atmospheric heating effects (positive radiative forcing) of BC in the Arctic are considered to be highest in spring when BC mass concentration is highest and incoming solar radiation is increasing. BC in spring is also important because slight changes in the timing of snow/ice melt can influence the radiation budget in the Arctic. The observations presented in this study provide useful bases to improve and evaluate numerical model simulations that assess the BC radiative effect in the Arctic. Furthermore, global warming has the potential to increase biomass burning in mid- and high-latitudes. This study suggests that these future changes in BC emissions could influence the amount of Arctic BC and its radiative impacts more than estimates provided in previous studies.

This research was partly supported by the Arctic Challenge for Sustainability (ArCS) project (JPMXD1300000000) and ArCS II (JPMXD1420318865) project of the Ministry of Education, Culture, Sports, Science, and Technology of Japan and the Environment Research and Technology Development Fund (JPMEERF20202003) of Environmental Restoration and Conservation Agency. Other funding information is found in “Acknowledgements” of the original paper. 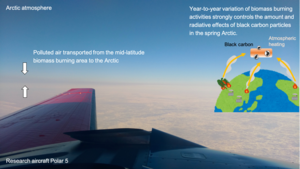