NORMAN, OKLA. – Flash droughts are described as rapidly developing, unexpected periods of drought. These flash droughts can cause severe impacts to agricultural and ecological systems and cause ripple effects that extend even further.

“Given that flash droughts can develop in only a few weeks, they create impacts on agriculture that are difficult to prepare for and mitigate,” said Jordan Christian, a postdoctoral researcher at the University of Oklahoma and the lead author of a study published in the journal Nature Communications. “Even when environmental conditions seem unfavorable for rapid drought development, a persistent, multi-week lack of rainfall coupled with hot weather can create flash drought development with its associated impacts.

“The onset and timing of flash drought is a critical component to agricultural impacts, as flash drought can drastically reduce crop yields and lead to severe economic losses and potentially disrupt food security,” said Jeffrey Basara, an associate professor in both the School of Meteorology in the College of Atmospheric and Geographic Sciences and the School of Civil Engineering and Environmental Sciences in the Gallogly College of Engineering at OU. “These impacts can have cascading effects, including increased risk for wildfires, depletion of water resources, reduction of air quality and decreased food security.”

Basara, who is also the executive associate director of the hydrology and water security program at OU, is the principal investigator and Christian’s faculty adviser. The OU-led study explores the global distribution, trends and drivers of flash drought occurrence.

“Going back into the early 2000s, there was a realization that these flash droughts happen,” Basara said. “Just as not all droughts are the same, some of these droughts evolve much faster than normal.

“This study is really important because although here in the U.S. we can often mitigate some of the effects with irrigation and other tools, a number of these types of events happen in places where they can’t be mitigated,” he added. “When that happens in areas dependent on subsistence living, where agricultural production is needed to survive, these types of events can be really devastating for the local system and create a lot of socioeconomic turmoil.”

The study identifies global “hotspots” for flash drought from 1980 through 2015. Of the 15 locations analyzed, eight were identified as having experienced both the most flash drought occurrences for their regions, and as being locations with at least 20% of their total land areas used for agricultural production.

“What’s interesting about flash droughts is they do have some preferential zones around the word,” Basara said. “One of the more interesting aspects of this particular work is that we were able to start to identify these zones. We often associate drought with a lack of rainfall. For these flash drought events, about half of the contributing factor is a lack of rainfall, the other half is what we call ‘hostile layer mass’ – it gets really hot and dry.”

The research team describes these regions as including the “Corn Belt” across the midwestern United States, barley production in the Iberian Peninsula, the wheat belt in western Russia, wheat production in Asia Minor, rice-producing regions in India and the Indochinese Peninsula, maize production in northeastern China, and millet and sorghum production across the Sahel.

“While several regions across the world have seen increasing or decreasing trends in flash drought over the last four decades, it is also critically important to know which regions may become more susceptible to flash drought risk in the future,” Christian said. “This is especially true in areas with agricultural production, as changes in frequency or timing of flash drought will create additional challenges during the growing season. This study provides a foundation to build off and explore key questions regarding future trends of flash drought occurrence.”

Christian added, “When flash drought events were examined, one thing was clear – timing is everything in terms of impacts from these events.”

In 2019, Christian and Basara developed a method to begin to identify flash droughts. That methodology has helped researchers begin to better understand these events.

“When I entered the Ph.D. program in 2017, Dr. Jeff Basara and I had a conversation about a research topic for my dissertation and he said, ‘I have an idea regarding flash droughts,’” explained Christian. “That idea translated into the creation of a method to identify flash drought, the investigation of several flash drought events, and ultimately led to the global analysis of flash drought. It turned out to be a pretty good idea.”

Christian led a study published in Environmental Research Letters in 2020 that looked at the impact of a major heatwave in Russia in 2010. Preceding that heatwave was a flash drought. The impact of those weather events led to the decimation of Russia’s wheat crop, so much so that Russia stopped exporting.

“Russia’s biggest wheat importer were countries in the Middle East, so the price of grain went through the roof in the Middle East,” Basara said. “The social unrest of the Arab Spring was created, in part, because of the unusually high grain prices and the socioeconomic turmoil those prices caused. That ripple effect was caused by a flash drought in one part of the work that affected an entirely other portion of the world.”

With this study, the researchers are expanding their understanding of where flash droughts are more likely to occur around the world.

“This study helps us understand where they’re happening, but now we need to understand more about the why,” he said. “We see that depending on where you are in the globe, the mechanisms are a bit different from one place to another.

“As we go into a changing climate system, as we have population growth and food security issues, this becomes one of those topics that’s important because of its really severe impact on agriculture and water resources,” he added. “It has cascading impacts like wildfires and more. If we can better understand these flash droughts, we might have a better understanding of their predictability and then we can better plan for these types of events.”

The paper, “Global distribution, trends, and drivers of flash drought occurrence,” is published in the journal Nature Communications, DOI #10.1038/s41467-021-26692-z. Jordan L. Christian is the lead author. Jeffrey B. Basara is the principal investigator. The OU team also includes Jason Furtado, School of Meteorology, and Xiangming Xiao, Department of Microbiology and Plant Biology in the Dodge Family College of Arts and Sciences and the Center for Spatial Analysis. The work was funded by the NASA Water Resources Program grant 80NSSC19K1266, the National Science Foundation grants OIA-1920946 and OIA-1946093, and the USDA Southern Great Plains Climate Hub.

About the University of Oklahoma

Founded in 1890, the University of Oklahoma is a public research university located in Norman, Oklahoma. OU serves the educational, cultural, economic and health care needs of the state, region and nation. For more information visit www.ou.edu. 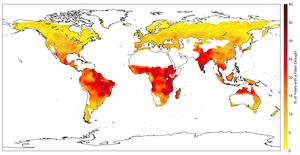