Persistent observations of large underwater animals are difficult to achieve without the help of electronic, multi-sensor tags. Data obtained from these sensors provide important insight into the biomechanics, activity patterns, energy expenditure, diving and mating behaviors of these animals, which are otherwise “foreign” to the scientists who study them. In particular, there has been little work done on large reef fish such as the Atlantic goliath grouper (Epinephelus itajara), whose behaviors have been poorly described despite being a common inhabitant of many of Florida’s offshore reefs and wrecks.

Researchers from Florida Atlantic University’s Harbor Branch Oceanographic Institute and College of Engineering and Computer Science are the first to reveal detailed behavior of this grouper species, which can reach lengths of 8 feet and weigh more than 800 pounds. To accomplish this task, they developed a novel multi-sensor tag that includes a three axis accelerometer, gyroscope and magnetometer (collectively referred to as an inertial measurement unit or IMU) as well as a temperature, pressure and light sensor, a video camera and a hydrophone for monitoring underwater sound.

For the study, published in the journal Sensors, researchers used machine learning, a type of artificial intelligence (AI), to classify the IMU data obtained from the custom-built multi-sensor tag into goliath grouper behaviors. Because these sensors can produce millions of data points in a short time period, machine-learning methods are used to automate the process of classifying the data into behavioral classes. The minimally invasive tag recorded IMU data and video concurrently so that the researchers could identify the different behaviors, and train and compare three algorithms: two conventional machine learning approaches and a deep learning approach. The video also provided them with the fish’s perspective and captured interactions with other animals. It even captured two nurse sharks mating.

“Much of our understanding of goliath grouper behavior has been learned from divers, from underwater video footage, and observing animals in captivity,” said Lauran Brewster, Ph.D., first author and a senior research fellow in The Fisheries Ecology and Conservation Lab at FAU Harbor Branch. “Monitoring of goliath grouper sound production and modest animal tracking work has provided some insight into habitat preference and movement patterns. However, until now, no studies have documented the fine-scale behavior of this species.”

Brewster notes that behaviors included how the bodies of these massive animals navigated through complex artificial reef environments, maintained themselves in high current areas, and how much time they spent within different cracks and crevices, none of which would not have been possible without these novel, multi-sensor tags.

Six goliath grouper were tagged and 13 behaviors were identified using video footage from the tags. The researchers collected enough data to classify nine of the 13 behaviors that were identified. The time each fish engaged in a behavior varied and not all individuals exhibited every behavior. The most common behaviors were hovering, forward swimming and resting, however, more sporadic behaviors including vocalizations or “booms” were captured and classified.

Goliath grouper produce a “boom” sound as part of courtship, spawning and agonistic behavior, which makes it a behavior of particular interest and one that can be monitored using underwater sound recorders (known as passive acoustic monitoring). A limitation of that method is the inability to approximate how many fish are contributing to sound production. The deep learning method used in this study robustly classified booming behavior, providing a way to determine sound production at the individual level. As such, it may serve as a complementary method to more traditional passive acoustic monitoring.

“We developed a novel multi-sensor tag and a reliable attachment method, which can be applied to similar species around the world,” said Matt Ajemian, Ph.D., senior author, assistant research professor and director of The Fisheries Ecology and Conservation Lab at FAU Harbor Branch. “Knowledge of the fine-scale activity of goliath groupers can help scientists and others understand the ecology of this species, a key research need highlighted by the International Union for the Conservation of Nature.”

Findings from this study present an opportunity to quantify how the activity of wild goliath grouper may differ based on time of day and season, between habitat types such as artificial versus natural reefs, and between pristine habitats and those impacted by human activity such as fishing, diving, and boat traffic. These customized tags could help quantify the frequency of these types of interactions with humans and help make more informed management decisions.

Groupers are comprised of more than 160 species of commercially and recreationally important fishes that inhabit coastal areas of the tropics and subtropics. This family of long-lived fishes shares life history traits that make them particularly vulnerable to overfishing, including late sexual maturity, protogyny, and the formation of spawning aggregations.

This work was conducted at the St. Lucie power plant facility with the help of Inwater Research Group and was developed with funding from the Defense Advanced Research Projects Agency (DARPA). 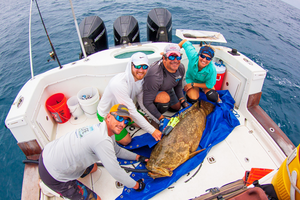 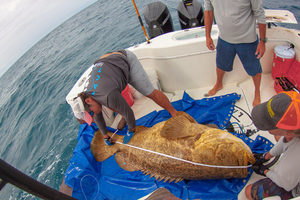