This study is done by Dr. Ruifeng SU (Beijing Institutes of life science, the Chinese Academy of Sciences), and together with Prof. Mee-Mann CHANG (Institute of Vertebrate Paleontology and Paleoanthropology, the Chinese Academy of Sciences) and Prof. Gengjiao CHEN (Natural History Museum of Guangxi Zhuang Autonomous Region). So far, team found that grass carp characteristic pharyngeal teeth fossils have been unearthed from 22 Cenozoic sites in China, and some of them were assigned to Ctenopharyngodon or recorded (Fig. 1). However, researchers puzzle over if those from different Cenozoic strata can represent grass carp (C. idella).

The Cyprinidae is the largest family of freshwater fishes in the world. Adult grass carp  can grow up to a meter in length. Their typical vegetarian feeding habit base on characteristic comb-like pharyngeal teeth. Only it hitherto possesses the comb-shaped tooth crown (Fig. 2). Along with a large number of recent adult and baby grass carp pharyngeal teeth and fossils being researched and compared, the team discovered that those comb-like pharyngeal teeth fossils from different Cenozoic sites differ from each other in the shape of grinding surface, the number of ridges and grooves on lateral surfaces of tooth crown, etc.

According to temporal and spatial pattern and evolution, researchers judged the grass carp could have originated during the Oligocene in the western part of China, from a carnivorous fish surrounded by a temperate grassland environment, not quite the same as the habitats C. idella requires today. The presence of grass-carp-like fish indicates that the ecological environment around Sanshenggong in the western area of China during the Oligocene, though somewhat dry and cold, was relatively temperate as compared to today. With their spreading eastward, throughout the Miocene, as far as the fossils researchers have collected so far, their area of existence was much more wider ranging than at the present time, covering the western, eastern and northern parts of China, and the environment of the western part of China was mainly grassland, not drier than today, whereas the northern part of China might be warmer and more humid than it is today, before the winter Monsoon was strengthened. And the living habits of the “grass carp” began to modify with the change of the environments towards their recent circumstances. With the uplift of the Tibetan Plateau, during their spreading eastwards to the east lowland area of Asia, to the newly developed large river systems, they have adapted to the changed environment with exuberant water vegetations, the teeth become more compressed, the number and length of ridges and grooves on the teeth increased, the grinding surface turned out to be surrounded by meandrous enamel margin. In the end, the tooth becomes considerably comb-like, providing high efficiency for shearing aquatic plant.

Interestingly, the long known lower Miocene Shanwang ichthyofauna with thousands of well-preserved fossil fish skeletons does not contain any grass carp like fish, although the Xiejiahe Formation from Shanwang and Xiacaowan Formation from Sihong are approximately of the same age and both localities are situated in the eastern part of China, not far from each other, and not far from the Recent Pacific coast, containing similar mammal faunas under similar warm and humid climate and low-altitude environment. It seems that the existence of grass carp like fish not only depends on the climate conditions mentioned just now, but also depends, in a large extent, on the disposition of the water system.

Fossil pharyngeal teeth of grass carp group and their implications for evolution, temporal and spatial distribution pattern, and paleoenvironment 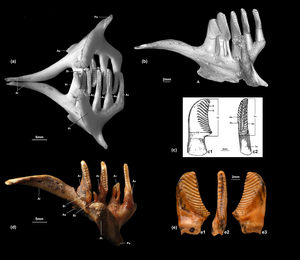 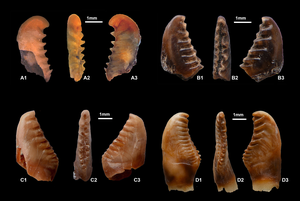