UNIVERSITY PARK, Pa. — We humans tend to avoid harsh conditions when we are sick, instead seeking out the comfort of our climate-controlled homes. New research shows that sick insects may also be sensitive to extreme temperatures, and it could be the pathogen itself that drives their behavior.

An international team of researchers has found that infection with a fungus reduces the thermal tolerance of an aphid and its beetle predator — the common ladybeetle — by more than 40 degrees Fahrenheit compared to healthy individuals. As a result, infected insects are less likely to cross into zones that are too warm or too cold, and this behavior change could have implications for predator-prey interactions as the climate changes. The findings published today (Nov. 5) in the journal Scientific Reports.

“The effects of climate change on insects are poorly understood,” said Edward Rajotte, professor of entomology, Penn State. “Our research showing that pathogens influence the tolerance of insects to extreme temperatures suggests that we cannot expect to understand how an organism will respond to environmental changes by studying the insect species alone; we need to also consider their pathogens.”

To conduct their study, the researchers raised aphids (Acyrtociphon pisum) and ladybeetles (Hippodamia convergens) on faba bean (Vicia faba L.) plants. Next, they sprayed spores of a fungus (Beauveria strain) in low and high quantities onto half of the aphids and beetles. The other half were maintained as controls. Two days after inoculation, the scientists collected adult aphids, both those infected with the fungus and those not infected with the fungus, from the experimental plots and measured physiological parameters, including critical temperature maximum and minimum, voluntary exposure to extreme temperatures and energetic costs under each condition. The team then released 300 adult beetles into the cages with the aphids, allowed the beetles to feed on the aphids for 2-3 days, during which they also became infected with the fungus, and then collected the beetles for physiological measurement.

“We found that the heat tolerance of fungus-infected aphids and beetles was reduced by 44 degrees Fahrenheit and 40 degrees Fahrenheit, respectively, while cold tolerance, was only reduced in the beetles,” said Mitzy Porras, postdoctoral scholar in entomology, Penn State. “In addition, survival was significantly reduced for infected aphids and beetles when they were exposed to both warm and cold extreme temperatures.”

“We recorded whether the insects explored, crossed into or relaxed within either of the extreme temperature zones,” said Carlos Navas, professor, University of Sao Paulo, who collaborated with Volker Loeschcke, professor at Aarhus University, in the design of the experimental arena.

“These findings suggest that the fungus might manipulate the insect host’s physiology and behavior in ways that favor fungal virulence since the fungus’s thermal thresholds are narrower than those of either of the insect hosts,” said Rajotte. “This is the first time, to our knowledge, that infection has been observed to shift the behavioral response of both a predator and prey in ways that reduce exposure to heat,” said Porras.

Porras noted that the response to thermal stress can vary among species, with some pathogens may influencing behaviors — such as crossing into extreme temperature zones — of certain insect species.

“This, in turn, may alter predator-prey interactions, food web structures and species distributions,” she said. “Our findings open the door to a wide array of potential research avenues related to the management of insect species and ecosystems.”

Jesper Sørensen, professor at Aarhus University, added, “We have learned that the relationships between pathogens and hosts are far more complex than we once thought. This study focuses on a specific case but has broad implications for the way we see these interactions, which can now be seen as another important dimension of ecology.”

The National Institute of Food and Agriculture of the U.S. Department of Agriculture supported this research. 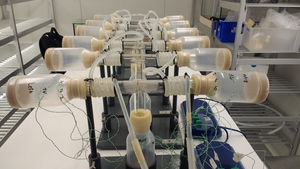