MIAMI—While rubbing up against a shark sounds like a risky move if you’re a fish, a collaborative research team led by the University of Miami (UM) Shark Research and Conservation Program at the Rosenstiel School of Marine and Atmospheric Science found that this behavior is frequent, widespread, and could play a previously unappreciated important ecological role for aquatic animals.

Although instances of fish chaffing against sharks has previously been observed, this study finds this cross-species behavior to be more pervasive than previously understood. The research team examined underwater photos, video, drone footage, and witness reports to find 47 instances of fish rubbing themselves against a shark’s skin. The chafing events, which were documented in 13 locations around the world, varied in duration from eight seconds to over five minutes. They recorded 12 fin fish chafing against eight different species of shark, including great whites. The team even documented silky sharks chafing on the head of a whale shark. The number of fish chafing against sharks ranged from one to over 100 individuals at a time.

“While chafing has been well documented between fish and inanimate objects, such as sand or rocky substrate, this shark-chaffing phenomenon appears to be the only scenario in nature where prey actively seek out and rubs up against a predator,” said UM Rosenstiel School graduate student Lacey Williams, who co-led the study with fellow graduate student Alexandra Anstett.

“While we don’t exactly know why it’s happening, we have a few theories. Shark skin is covered in small tooth-like scales called dermal denticles, which provide a rough sandpaper surface for the chafing fish,” said UM Rosenstiel School research associate professor and study co-author Neil Hammerschlag. “We suspect that chafing against shark skin might play a vital role in the removal of parasites or other skin irritants, thus improving fish health and fitness.”

Funding for the study was provided in part by grants from the Isermann Family Foundation.

Study finds fish rubbing up against their predators — sharks 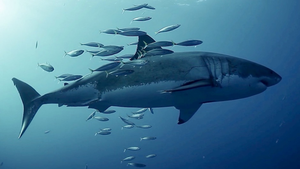