Scientists have transformed data captured during the most energetic series of extreme storms on record into a musical piece demonstrating the effects of climate change.

Song of the Sea, created by the University of Plymouth, has been released to coincide with the 26th UN Climate Change Conference of the Parties (COP26), which is currently under way in Glasgow.

It takes a popular sea shanty, What shall we do with the drunken sailor?, and manipulates it using actual data captured by the Southwest Regional Coastal Monitoring Programme.

The result is a piece that listeners will initially recognise, but which then changes as the data reflect the stronger winds and higher waves generated as the storm reached its destructive peak.

The project is the result of a collaboration between the University of Plymouth’s Marine Institute and its Interdisciplinary Centre for Computer Music Research (ICCMR).

It is centred on data gathered over a 48-hour period in February 2014, which resulted in the main rail line being washed away at Dawlish in south Devon.

Those two days were part of a series of storms that wreaked havoc along the Atlantic coasts of western Europe, with research by the University subsequently demonstrating them to have been the most energetic storms to hit western Europe.

To create Song of the Sea, researchers assigned elements of the data to segments of the music and as the data changes the song changes with it.

For example, wave height data were aligned to an echo effect on the words, distorting them as they grew more powerful. Wind speed was assigned to tempo, speeding up the piece as it intensified.

Pressure was aligned with pitch, so that as the pressure dropped in the middle of the storm, the vocals deepen and grow more slurred and ominous. And temperature was assigned to a distortion effect on the drum, causing it to ‘crunch’ as the weather grew colder.

The project builds on the University’s lengthy track record of combining science, the arts and other disciplines to enhance public awareness and appreciation of potentially complex areas of climate research.

Professor Richard Thompson OBE FRS, Director of the Marine Institute, said: “This project highlights our connection to nature and the very serious issues occurring as a result of climate change. It provides a snapshot of the devastation and destruction extreme storms can cause, but also shows how our relationship with the planet has become more distorted. As things stand, humanity is not dissimilar to the drunken sailor – intoxicated by its thirst for things, and unwilling to address the reckless plundering and destruction that results. Will we come to our senses in time? That has to be the challenge for the COP26 delegates in Glasgow.”

Researchers working in the ICCMR have for many years endeavoured to use ground-breaking musical compositions as a means of breaking down complex science.

In the past, this has resulted in the creation of a biocomputer, which harnesses the ability of slime mould to perform computational tasks, and a brain computer music interface (BCMI) that harnessed the brainwave signals of patients from the Royal Hospital for Neuro-disability (RHN) in London and enabled them to interact directly with musicians.

Professor Eduardo Miranda, Head of the ICCMR, added: “Historically, scientific data has normally been conveyed visually, as charts or illustrations. However, the combination of sound and images provides significantly more alternatives to convey information. Song of the Sea is a novel way of using actual climate data in such a way that it controls the music. And with extreme natural events predicted to increase in frequency and ferocity, there is no barrier to its principles being applied to represent the far-reaching effects of climate change on our planet.”

How Song of the Sea was made

“You have to strike a balance between the accuracy of the data and the way we listen to, and appreciate, music,” says Clive Mead, co-composer of Song of the Sea – the project that has turned nature’s fury into a sea shanty. “That’s been our guiding philosophy from day one – and it’ll be up to the public to judge if we’ve succeeded.”

For the past year, Clive and his fellow PhD researcher Dieter Hearle, have wrestled with the pitch and yaw of a project that has sought to interpret the complex story of climate change through the medium of music. Both members of the world-renowned Interdisciplinary Centre for Computer Music Research (ICCMR), the pair originally conceived of the idea as a continuous piece of music that might interpret the data flowing from a marine monitoring station.

But with the global COP26 conference on the horizon, the project changed course, striking out in the direction of an artistic representation of a single dramatic event – albeit one that is emblematic of long-term climate change.

“We all saw the impact of climate-induced extreme weather when the winter storms hit us in 2014,” says Professor Eduardo Miranda, Head of the ICCMR, a world-renowned computer music composer, and PhD supervisor to both Clive and Dieter. “It washed away our rail link to London and left many coastal communities having to mop up at best and rebuild at worst. Climate change is accelerating these dramatic natural events, and Song of the Sea has become a medium for telling that story.”

Clive, who has more than 25 years of experience as an artist, composer and producer, became involved in the project while undertaking his PhD with the ICCMR. A specialist in recreating vintage music styles, his research has been focused upon how the limitations of technology and instruments going back through the decades impacted upon the creative processes of music studios.

“Everything has to be musical,” Clive says. “Much of what has been done previously is very academic and difficult to listen to.  And with this, if we wanted to engage the public in the climate and the sea, there was no point in doing it twisted, distorted and machine-like. That’s why I chose the sea shanties; people know them and have a deep connection with them.”

Clive selected seven tracks to work with, including Plymouth Town, Haul Away Joe, Leave Her Johnny – and for the winter storm project, Drunken Sailor, which he felt was the most recognisable and dramatic. He worked with a professional singer to record multiple layers and harmonies for each song, and then wrote and choreographed the music, mixing traditional and contemporary instruments sourced form online orchestral libraries. Clive ensured each of the pieces had a consistent set of instruments so that they could smoothly segue into each other if required, and he also mixed in audio of marine life, such as pilot and sperm whales and dolphins.

The second half of the equation is Dieter, a former student at the University and musician, who has been researching interactive sonification – the art and science of turning data into sound and music.

“It’s a way to make data much more accessible to people,” he says. “You can pretty much use it for any data stream. Initially we looked at meteorological data from the University’s weather sensors. But for Song of the Sea, a renowned researcher from the Marine Institute provided us with the data from the Southwest Regional Coastal Monitoring Programme, which consisted of wind speed, air pressure, temperature and wave height – running up to nine of ten decimal points!”

Using a programme called Max/MSP, Dieter could feed in the figures, which had been recorded at 30-minute intervals, beginning at midnight on 4 February 2014 and ending 48 hours later. The numbers tell their own story: Wind speed strengthening from six to 17 metres per second; air pressure falling from 993 to 969 bar; and wave heights rising from 2.1m to more than 5m, all hitting peak ‘performance’ in the early hours of the 5th, before quietening down during the course of the afternoon.

From that process, Dieter was able to extract MIDI note and controller data that could be read by Apple’s Mainstage music software – and used to alter the playback of Clive’s recordings. What then followed was a long process of adjustment and iteration as the pair tweaked the scales to find the right balance between responsiveness and musicality.

“It took weeks and weeks to get right,” says Dieter. “If you have sections where the data does not change, how do you make that interesting? The temperature, for example, might not alter up or down for a long time, so the temptation is to make that more sensitive – but you have to keep it within limits.”

Through experimentation, they discovered that certain weather and wave parameters were better suited to altering specific characteristics of the music:

As the project progressed, it became clear that any ‘live installation’ that might require the use of all seven recorded songs would be paused in favour of a COP26-inspired proof of concept. So, Clive finalised a three-and-a-half-minute version of Drunken Sailor, condensing the 48 hours preceding, during and after the storm. The result is a dizzying, disorientating experience, albeit rooted in the recognisable, lyrical traditions of sea shanties and maritime music. And as the piece returns to its recognisable rhythm in the final minute, with the storm fading away, so the hope is that the listener – the public – will reflect upon the journey it has taken them on.

“Music is a great vehicle to communicate the full spectrum of human experience,” adds Eduardo, who has worked on projects as broad yet impactful as helping people with locked in syndrome to make music and using sonification to help people better understand the mechanics of their breathing. “So why not let it speak for our planet and its environment?! And if we do not listen, then we will only have ourselves to blame for what follows. 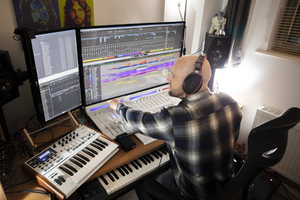