Below -148 °C (125 Kelvin), magnetite (Fe3O4) – the oldest magnetic material known to us – changes from metal to insulator. At that particular temperature, the material undergoes drastic transformations in its crystal structure, as well as its electric and thermal properties. Known as the Verwey transition, this physical process was discovered over 80 years ago. It remains arguably one of the most important and challenging problems in condensed matter physics, still lacking a complete understanding.

Oxidation changes the charge of the iron in the magnetite and affects the ordering pattern inside the material. As more and more oxygen molecules penetrate deep into the magnetite nanoparticles, a gradual decrease would be expected in the Verwey transition temperature to a minimum value. Instead, the researchers observed an intriguing and previously unreported variation of the Verwey transition temperature: it lowered to a minimum of approximately -203 °C (70 Kelvin) after 72 days of oxidation before rising to -178 °C (95 Kelvin). The team has explained this phenomenon with an elegant diffusion model.

The researchers calculated how many oxygen atoms could diffuse into the nanoparticles over time. They chose to use nanoparticles because studying the Verwey transition upon oxidation at room temperature in a larger block of magnetite would be prohibitively slow. “Nanoparticles have a large surface where oxidation can take place, so they allow us to study this process on a reasonable timescale. The same experiment on a larger piece of magnetite would require an incredible number of years… I would say it would take forever,” explains Taehun Kim, one of the researchers who took part in this study.

It is still a slow experiment though. After approximately 140 days, only about 70 oxygen atoms are incorporated into each magnetite nanoparticle per day. The team took advantage of this slow pace to understand the various aspects and limits of the oxidation.

While at the beginning of the oxidation process oxygen concentration is higher in the outer than inner layers of the nanoparticles, this initial gradient reduces over time. “We suggested that the increase and decrease of the oxygen concentration gradient may be related to the drop and recovery of the Verwey transition temperature,” points out Kim. “However, it is unclear why such a small quantity of oxidation (or doping) has such a big influence on the Verwey transition. This could be the next direction of this research.”

“A much bigger lesson we learned from this work is that our experimental approach can be adapted to many different nanoparticles. It will open a completely new door to the oxidation problem on nanometer scales. If successful, it will be a much wider consequence of this work going beyond the advances our understanding of the effect of oxidation on the Verwey transition in magnetite,” says Je-Geun Park, who led this study at Seoul National University.

The intriguing behavior of magnets with an extra bit of oxygen 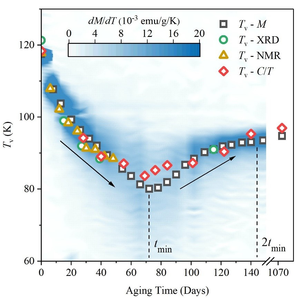