For every fusion facility around the world, it is striving for steady state fusion reaction with operation period as long as possible. However, it is not easy. Many challenges stand in the way. Reliable divertor scenario with high power handling capability is key among that.

Last year, EAST facility had a major upgrade for an overall improvement in its operation, among which how to enhance power handling capability of lower divertor was a vital problem EAST team had to solve.

For a better capability of lower divertor, the EAST team had made a lot to propose a comprehensive solution from physics design to engineering manufacturing. A new concept was put forward. The team called it Corner Slot divertor, which has been upgraded in both shape and material.

The solution was a full chain of solving program and also a result of international collaboration.

For its physics design and its follow-up verification, the team used a plasma edge modelling tool, SOLPS-ITER, which is a powerful and advanced tool developed parallelly by ITER members (distributed and maintained by the ITER Organization) to solve fusion-related key problems. With help of the modelling tool, series of physics design and repeated verification could be done.

In their new Corner Slot divertor, the vertical and horizontal target plates together formed a right angle, a change at its slot from being V-shaped to Corner-shaped, letting the cooling water flow much faster, then the heat could be taken away in a shorter time.

And the Corner Effect, produced by the Corner shape, generated a high-pressure neutral area near the corner so that the stable detachment could be maintained across the entire outer target plate with a relatively lower impurity seeding rate.

Moreover, as a large and extremely complex machine, fusion facility assembly always requires high precision. Compared to V-shape, Corner Slot divertor was much simpler to be manufactured and installed as well. Then the assembly precision could be relatively ensured, making the entire facility more reliable and more economical.

During operation, this Corner Slot divertor offered much more candidate area for heat loading, and outer strike point could be on either vertical or horizontal target plates or slowly scanned in between, enabling advanced scenarios exploration.

Except for the modification in the slot shape, the Corner Slot divertor also had change in its material.

Tungsten-copper structure was employed instead of the previous graphite. Tungsten is a kind of material showing a greater ability for being cooled down and reducing fuel retention.

Looking back to this spring, the new Corner Slot divertor was successfully manufactured till March and had been equipped in vacuum vessel of EAST facility in April after a series of modeling work. It was the time for the engineeringly experienced team to bring their physics idea into reality.

In the following three months, together, the new lower divertor with the EAST has undergone the 2021 spring campaign in which EAST achieved a plasma temperature of 120 million degrees Celsius for 101 seconds, a new record and also another milestone in EAST progress toward the test running of a fusion reactor.

A series of parameter obtained from the experiment suggested a great improvement in EAST performance. The upgraded divertor was a big factor behind the achievement. In the spring campaign, the team was pleased to see a dramatic enhancement in lower divertor’s power handling capability from less than 2MW/m2 to around 10 MW/m2, nearly five times of the previous graphite divertor.

Result from EAST experiment spoke clearly of the Corner Effect. The team also conducted further verification work by using SOLPS-ITER tool, which showed experiment result was greatly accord with that of the simulation.

The success of new Corner Slot lower divertor inspired the upgrade of its upper part. A more closed divertor, Sharp-cornered Slot divertor, according to the team, is being developed, which is considered as a preferred candidate for the EAST upper divertor. 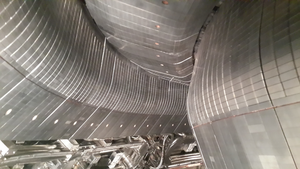