After observation of over 300 specimens collected from the Upper Devonian of Dongzhi County, Anhui Province, Prof. De-Ming Wang from Peking University locked his eyes on a series of ovules that are directly attached to the tip of dichotomized ultimate branches. “That’s unusual,” says Prof. Wang, “the connection between these ovules and branches proved the lack of a cupule (surrounding the ovule and functioning as protection and pollination). By contrast, almost all the other Late Devonian ovules reported previously were born in a cupule. The history of acupulate ovules is thus stretched forward for about 40 million years.”

These ovules are then named “Guazia” from Chinese pinyin “Gua Zi” referring to their shape similar to a sunflower seed, with a tapered base and a slightly wider middle and upper part. The morphology of these ovules is firstly revealed by dégagement, showing four “planate wings” covering the most part of the central nucellus.

To determine the detailed structure of the ovules, Prof. Wang and his colleagues re-bonded several parts and counterparts of Guazia ovules with resin, and made serial transverse sections for microscope examination. In the sections, four outgrowths of integument heavily folded in U or V shapes are radially arranged around the nucellus and perpendicular to each other, and are fused at the middle and lower parts of the ovule but separated at the upper parts, which overtopped the central nucellus. “The ‘wings’ of Guazia ovules are not just a ‘thin, flat plate’, but should be interpreted as lengthwise-folded integumentary lobes.” Says Le Liu, who made the 3-D reconstruction of the ovule.

Propagules with wing-like structures are common in both fossil and living seed plants, but are rare in the Late Devonian. The researchers believe that the four wing-like integumentary lobes of Guazia ovules may increase the windward area so as to achieve long distance dispersal. “Considering the height of the parent plant, even if these ovules may not be carried far by wind during abscission, they could be blown along the ground after landing.” Says Yi Zhou.

Cupule and integument in the Late Devonian seed plants not only protect the ovule, but also help trap the wind-borne pollen. However, in the more derived later seed plant lineages, the cupule gradually reduced and finally disappeared but the importance and complexity of integument increased. “We could infer that the wing-like integuments of Guazia replaced the cupule for the role in protection and pollination, and may also perform the function of potential wind dispersal.”, says Prof. Wang.

Guazia, the earliest ovule without cupule but with unique integumentary lobes 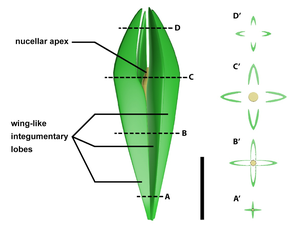 3-D reconstruction and interpretative sections of a Guazia ovule