Precise detection of magnetic fields is important for applications that range from magnetic brain imaging, to detection of sunken ships, to exploration of the solar system. For many of these applications, the most sensitive magnetic-field measuring instruments (magnetometers) are “optically-pumped magnetometers,” which use laser light to probe magnetically-sensitive atoms.  In many cases, the sensitivity of these instruments is limited by random variations (noise) in the laser light used.  If that noise can be reduced, the magnetometer becomes more sensitive, and tinier changes in the magnetic field can be detected.

Scientists work hard to make their lasers as noise-free as possible, but there are limits: light, even laser light, arrives as packets of energy (photons), and the random arrival of these photons produces a noise known as “shot noise.”  Even the quietest laser still has shot noise, and this often sets a limit on how precise a measurement can be.

Nevertheless, the shot-noise limit is not absolute.  If one could organize the photons to arrive in a more regular stream, more like beer flowing out of a tap in a bar, than like raindrops falling randomly on a roof, the light stream would be quieter and the measurement more precise. While it is not easy to organize photons in this way, it is not impossible. The idea, known as “squeezed light” was proposed by a theoretician in 1981 as a way to improve the sensitivity of gravitational wave detectors, which also use laser light.  Four decades later, squeezed light is routinely used in gravitational wave detectors like LIGO and VIRGO to improve the sensitivity, and to understand more precisely events like the collisions of black holes.

In a recent study published in Physical Review Letters, ICFO researchers Charikleia Troullinou, Ricardo Jiménez-Martínez, Vito Giovanni Lucivero, led by ICREA Prof at ICFO Morgan Mitchell, and in collaboration with Jia Kong from Hangzhou Dianzi University in China, resolve this question. They show that the critical factor is the evasion of measurement back-action. That is, the light that probes the atoms must only disturb the atoms in ways that do not change their response to the magnetic field. They then constructed a back-action evading magnetometer, applied squeezed light, and saw that this improved the sensitivity.

In their experiment, the team built a Bell-Bloom (BB) optically pumped magnetometer (OPM) and used polarization squeezed light to observe the response of a dense, hot cloud of rubidium atoms (87Rb) to a magnetic field.

As Charikleia Troullinou comments, “We used linearly polarized light to probe the magnetic properties of the hot dense atomic ensemble and implemented a very sensitive magnetometer limited mainly by quantum noise. On top of that, the generation of squeezed light and its use for probing instead allowed us to suppress the photon shot noise in the signal. We showed that this directly improves the magnetometer’s performance, making it more sensitive and better in its response to fast signals.”

Dr. Lucivero comments “We figured out that, in the context of atomic sensors, the Bell-Bloom measurement scheme is naturally backaction evading, since the backaction noise affects the spin component that is not measured. Then the effect of squeezed-light is beneficial over the entire frequency spectrum”.

As ICREA Prof. at ICFO Morgan Mitchell comments “The important and surprising thing about this result is that squeezed light improves the sensitivity of a good magnetometer, used in a way that good magnetometers normally operate. This means the technique could be put into practice almost immediately, for example on magnetometers used in geotechnical applications. It also means that one can have all the advantages already identified for these magnetometers, plus the sensitivity boost from squeezed light. It really is a “free lunch” – something good with no negative side-effects.”

Link to the research group led by ICREA Prof. at ICFO Morgan Mitchell

ICFO is a CERCA research centre member of the Barcelona Institute of Science and Technology, founded in 2002 by the Government of Catalonia and the Universitat Politècnica de Catalunya · Barcelona Tech, both of which are members of ICFO’s board of trustees along with the Cellex and Mir-Puig Foundations, philanthropic entities that have played a critical role in the advancement of the institute. Located in the Mediterranean Technology Park in the metropolitan area of Barcelona, the institute currently hosts 450 people, organized in 26 research teams that use 80 state-of-the-art research laboratories. Research lines encompass diverse areas in which photonics plays a decisive role, with an emphasis on basic and applied themes relevant to medicine and biology, advanced imaging techniques, information technologies, a range of environmental sensors, tunable and ultra-fast lasers, quantum science and technologies, photovoltaics and the properties and applications of nano and quantum materials such as graphene, among others. In addition to three consecutive accreditations of the Severo Ochoa national program for top research excellence, ICFOnians have been awarded 15 elite ICREA Professorships as well as 40 European Research Council grants. ICFO is very proactive in fostering entrepreneurial activities, spin-off creation, and creating collaborations and links between industry and ICFO researchers. To date, ICFO has helped create 11 start-up companies. 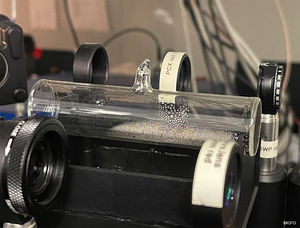