With the United Nations climate conference in Glasgow, the world is focused on the consequences of a climate crisis and how we can still change course. Yet while climate-driven migration has been deemed a major threat in public discourse and academic research, comprehensive studies that take into account both environmental and social factors globally have been scarce. Now, with the help of machine learning, a research team led by Aalto University has drawn a clearer picture of the factors involved in migration for 178 countries.

Traditionally, research on climate change-related migration has taken a linear approach, concentrating on whether or not environmental stress is directly related to migration—typically for one country or set of countries at a time. Researchers have known that social factors must also play a role, but studying both at a global scale, with all necessary information for all countries and sub-regions, has been a major challenge.

‘Perhaps the most surprising finding from our study is that, when we look at the overall picture, social factors are more important than environmental factors in explaining migration. And regardless of the level of income involved, gross national income was the key factor in explaining net-migration in half of countries,’ says Venla Niva, a doctoral student at Aalto University and lead author of the study published in Environmental Research Letters.

In their analysis, the team made use of a machine learning technique, called random forest analysis, well suited to dealing with the complex relationships seen between variables in very large sets of data. This allowed the researchers to explain the importance of each factor for each of the countries studied. Social factors were assessed in terms of income, education in years, life expectancy, government effectiveness; environmental factors were measured through natural hazards, water risk, food production scarcity, and drought prevalence.

The data used in the study is from 1990 to 2000, the most recent period for which information from 178 countries of the world, both high- and low-income, is available at the level of detail studied: 10 km by 10 km units.

‘Very detailed data at the local, rather than national, level lets us see the areas from which people have moved, as well as the areas people have moved to—whether that’s across borders or within the country. For example, if a specific area has seen environmental stress, like a drought, we can zoom in to see whether there has been a loss of people due to out-migration over that same period,’ says Niva.

‘This is one of the biggest challenges of our times: the areas under environmental stress are the areas with lowest resilience, which means that they aren’t well equipped to cope with changes. As populations in Africa and South Asia are rapidly growing, decision-makers need to help build capacity to ensure vulnerable areas can deal with the consequences of a warming climate as well as other environmental stressors,’ explains Matti Kummu, professor of global water and food issues at Aalto University.

To get a better sense of how the factors explain more recent global migration, the team is currently creating a dataset that spans 2000-2020, with results expected in the next year or so.

‘For now what we can say is that with this recently published study we’ve been able to identify the basic factors involved in migration—next we’ll explore if and how the factors have changed in importance over time, as the climate heats up,’ says Kummu. 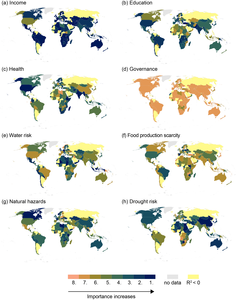