A new generation of networked, cooperating robots being developed by researchers in the Center for Connected Autonomy and Artificial Intelligence (ca-ai.fau.edu) at Florida Atlantic University’s College of Engineering and Computer Science and Institute for Sensing and Embedded Network Systems Engineering (I-SENSE) is all about “teamwork.” The Center received a $1 million grant from the National Science Foundation (NSF) to develop the nation’s first-of-its-kind testbed platform that connects robots using extremely high-speed millimeter wave links. These high-frequency radio waves (30 to 300 gigahertz), until more recently, were primarily used for remote sensing, radio astronomy, automotive radar and security screening.

Traditionally, sensing technology used for robotic systems includes cameras, GPS and LiDAR. Communication-wise, individual robots are conventionally connected to a central controller over Wi-Fi or 5G. The FAU research team will equip a team of robots with individual programmable millimeter wave modems to create their own super-high-speed autonomous network and then train them to execute tasks as a team. The autonomous mm-wave network will have dual use in robot-to-robot communication and sensing. Center researchers will develop new multi-agent learning algorithms executed over the networked robots, as well as protocols for networked robotic team operation.

“Just like humans, autonomous robots need to communicate with one another to learn together and to accomplish a team task or mission such as search and rescue,” said Dimitris Pados, Ph.D., principal investigator, Schmidt Eminent Scholar Professor, Department of Electrical Engineering and Computer Science, a fellow of FAU I-SENSE and director of the Center for Connected Autonomy and Artificial Intelligence, which has already garnered more than $9 million in federal funding since its official opening in March. “Our five testbed robots will be able to communicate at ultra-high speeds of gigabits per second by forming and directing ‘beams’ toward each other that also will enable them to see through objects as needed. They will see, so to speak, what the other robots are sensing in real-time, resulting in five times the eyes thanks to the nearly instantaneous exchange of high volumes of data.”

Because data is the fuel to train and operate AI systems, Center for Connected Autonomy and Artificial Intelligence researchers also are evaluating data quality. To train the robots, they will use curated data sets developed under their ACE (Autonomous Conformity Evaluation of Tensor Data by Means of Novel L1-norm Principal-Component Analysis) project funded by the United States Air Force Office of Scientific Research, which is aimed at evaluating data quality and suppressing faulty entries. They also are working to stop saboteurs’ attempts to inject faulty data to mislead autonomous systems by carrying out real-time operational data monitoring.

“Whenever you have faulty robots or a faulty autonomous system, it usually is the data that is at the root of the problem,” said Pados. “For example, a somewhat faulty sensor that produces a wrong measurement at the wrong time may be enough to lead to a catastrophic event. We are developing novel theory and algorithms to identify values in data that don’t conform to or make sense when they are correlated with each other, to serve as a warning system to let humans know that something is off. We do that both for the training stage of AI systems as well as their operational stage afterward.”

The new connected robotic platform offers a unique research and training opportunity in the exciting intersection of mmWave wireless networking, robotics, and multiple-agent AI. Researchers from all U.S. universities will be offered remote access to the FAU platform for experimentation.

“This novel platform developed by our team in the Center for Connected Autonomy and Artificial Intelligence will advance research activities in the field of multi-agent AI, and mmWave networking and communications,” said Stella Batalama, Ph.D., dean, College of Engineering and Computer Science. “It will enable rapid testing and repeatable comparable evaluation of collaborative AI operations and distributed sensing, positioning, timing, navigation, and communication developed by researchers at different institutions.”

The FAU College of Engineering and Computer Science is one of the top three fastest progressing Colleges of Engineering in the nation (2022 U.S. News and World Report) and is internationally recognized for cutting edge research and education in the areas of computer science and artificial intelligence (AI), computer engineering, electrical engineering, biomedical engineering, civil, environmental and geomatics engineering, mechanical engineering, and ocean engineering. Research conducted by the faculty and their teams expose students to technology innovations that push the current state-of-the art of the disciplines. The College research efforts are supported by the National Science Foundation (NSF), the National Institutes of Health (NIH), the Department of Defense (DOD), the Department of Transportation (DOT), the Department of Education (DOEd), the State of Florida, and industry. The FAU College of Engineering and Computer Science offers degrees with a modern twist that bear specializations in areas of national priority such as AI, cybersecurity, internet-of-things, transportation and supply chain management, and data science. New degree programs include Master of Science in AI (first in Florida), Master of Science and Bachelor in Data Science and Analytics, and the new Professional Master of Science and Ph.D. in computer science for working professionals. For more information about the College, please visit eng.fau.edu. 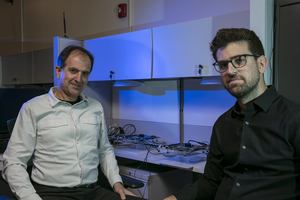