By watering bean plants (Phaseolus vulgaris) with a solution that contains conjugated oligomers, researchers at the Laboratory of Organic Electronics, Linköping University, have shown that the roots of the plant become electrically conducting and can store energy.

Dr Eleni Stavrinidou, Associate Professor and Principal Investigator in the Electronic Plants Group at the Laboratory of Organic Electronics, showed in 2015 that circuits can be fabricated in the vascular tissue of roses. The conducting polymer PEDOT was absorbed by the plant´s vascular system to form electrical conductors that were used to make transistors. In a later work in 2017, she demonstrated that a conjugated oligomer, ETE-S, could polymerise in the plant and form conductors that can be used to store energy.

“We have previously worked with plants cuttings, which were able to take up and organise conducting polymers or oligomers. However, the plant cuttings can survive for only a few days, and the plant is not growing anymore. In this new study we use intact plants, a common bean plant grown from seed, and we show that the plants become electrically conducting when they are watered with a solution that contains oligomers”, says Eleni Stavrinidou.

The researchers here have used a trimer, ETE-S, which is polymerised by a natural process in the plant. A conducting film of polymer is formed on the roots of the plant, which causes the complete root system to function as a network of readily accessible conductors.

The bean plant roots remained electrically conducting for at least four weeks, with a conductivity in the roots of approximately 10 S/cm (Siemens per centimetre).

The researchers investigated the possibility of using the roots to store energy, and built a root-based supercapacitor in which the roots functioned as electrodes during charging and discharging.
“Supercapacitors based on conducting polymers and cellulose are an eco-friendly alternative for energy storage that is both cheap and scalable”, says Eleni Stavrinidou.

The root-based supercapacitor worked well, and could store 100 times more energy than previous experiments with supercapacitors in plants that used the plant stem. The device can also be used over extended periods of time since the bean plants in the experiments continued to live and thrive.

“The plant develops a more complex root system, but is otherwise not affected: it continues to grow and produce beans”, Eleni Stavrinidou assures us.

The research group consists of researchers from the Laboratory of Organic Electronics, the Umeå Plant Science Center, the Wallenberg Wood Science Center at Linköping University, and from universities and research institutes in France, Greece and Spain.

Funding bodies for the research have included the EU Horizon Programme FET-OPEN-HyPhOE, the Swedish Research Council, the Wallenberg Wood Science Center, and the Strategic Research Area in Materials Science on Functional Materials (AFM) at Linköping University. 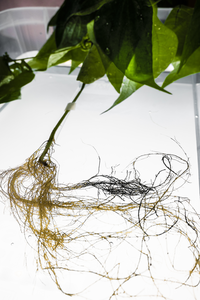