Back in the day, the Assyrians were one of the Near East’s biggest superpowers, controlling a land mass that stretched from Iran to Egypt. They accomplished this feat with military technologies that helped them win any open-air battle or penetrate any fortified city.  While today, air power and bunker busters help win the war, back in the ninth to the seventh centuries BCE, it was all about the siege ramp, an elevated structure that hauled battering ramps up to the enemy’s city walls and let the Neo-Assyrians soldiers wreak havoc on their enemies.

Constructed in Israel, the Assyrian siege ramp at Lachish is the only surviving physical example of their military prowess in the entire Near East.  Now, for the first time, a team of archaeologists has reconstructed how the Assyrian army may have built the ramp and used it to conquer the city of Lachish. The team, led by Professor Yosef Garfinkel and Dr. Madeleine Mumcuoglu of the Institute of Archaeology at the Hebrew University of Jerusalem (HU), and Professors Jon W. Carroll and Michael Pytlik of Oakland University, USA, drew on a rich number of sources about this historical event to provide this complete picture.  The outstanding amount of data includes biblical texts (2 Kings 18:9–19:37; 2 Chronicles 32; Isaiah 36–37), iconography (stone reliefs depicting Assyrian battle scenes) and Akkadian inscriptions, archeological excavations, and 21st century drone photographs.  They published their findings in Oxford Journal of Archaeology.

Lachish was a flourishing Canaanite city in the second millennium BCE and had been the second most important city in the Kingdom of Judah.  In 701 BCE Lachish was attacked by the Assyrian army, led by King Sennacherib.  Garfinkel’s analysis provides a vivid account of the construction of the massive ramp that was built by the Assyrians so that they could haul battering rams up to hilltop city of Lachish, breach its walls, and totally overrun the city.  There have been several conflicting views on how the formidable task of constructing the ramp was achieved.  However, the rigorous method employed by Garfinkel and his team, including photogrammetric analysis of aerial photographs and creating a detailed digitally map of the relevant landscape, produced a practical model that accounts for all available information about that battle.

The Assyrians had a mighty and well-equipped army that, in the early eighth century BCE, rapidly quelled growing rebellion in the Southern Levant. In 721 BCE the Kingdom of Israel was conquered. Twenty years later, the Assyrian army attacked the Kingdom of Judah, laying siege to its most important city, Jerusalem, and launching a direct assault on its second most important city, Lachish.  King Sennacherib himself went to Lachish to oversee its destruction, which began with his army building a ramp to reach the walls of the hilltop city.

According to Garfinkel, evidence at the site makes it clear that the ramp was made of small boulders, about 6.5 kg each. A major problem faced by the Assyrian army was the supply of such stones: about three million stones were needed. Where did these stones come from? Collecting natural field stones from the fields around the site would require a great deal of time and would slow the construction of the ramp. A better solution would be to quarry the stones as close as possible to the far end of the ramp. “At Lachish there is indeed an exposed cliff of the local bedrock exactly at the point where one would expect it to be,” Garfinkel shared.

The research suggests that its construction began about 80 meters away from the walls of the city of Lachish, close to where stones required for the ramp could be quarried. The stones would have been transported along human chains –passed from man-to-man by hand.  With four human chains working in parallel on the ramp each working round-the clock shifts, Garfinkel calculated that about 160 000 stones were moved each day.  “Time was the main concern of the Assyrian army. Hundreds of laborers worked day and night carrying stones, possibly in two shifts of 12 hours each. The manpower was probably supplied by prisoners of war and forced labor of the local population. The laborers were protected by massive shields placed at the northern end of the ramp. These shields were advanced towards the city by a few meters each day,” described Garfinkel.

In about 25 days, the ramp, which was the shape of a giant triangular wedge, could have reached the city walls. "This model assumes the Assyrians were very efficient, otherwise, it would have taken months to complete," said Garfinkel.  Indeed, the prophet Isaiah, who lived at the end of the eighth century BCE and was an eyewitness to the events, mentioned the Assyrian army in some of his prophecies. He relates to the Assyrians as a mighty, supernatural power, “None of them tired, none of them stumbling, none of them asleep or drowsy, none of them with belt unfastened, none of them with broken sandal-strap.” (Isaiah 5:27).

As the workers built the final stages of the ramp and approached the walls of Lachish, the inhabitants would try to defend their city by shooting arrows and throwing down stones on their enemy. Garfinkel suggests that the workers used massive L-shaped wicker shields, similar to those shown protecting soldiers on Assyrian reliefs.  In the final stage, wooden beams were laid on top of the stones, where the battering rams within their massive siege machines, weighing up to 1 ton, would be securely positioned.  The ram, a large, heavy wooden beam with a metal tip, battered the walls by being swung backwards and forwards.  Garfinkel suggests that the ram was suspended within the siege engine on metal chains, as ropes would quickly wear out.  Indeed, an iron chain was found on the top of the ramp at Lachish.

To get further confirmation, Garfinkel explains that he is "planning excavations in Lachish, at the far edge of the ramp in the quarry area – this might give additional evidence of Assyrian army activity and how the ramp was constructed."

Siege ramps and breached walls: Ancient warfare and the Assyrian conquest of Lachish 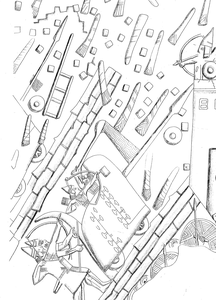 A small segment of the Assyrian siege ramps on the Lachish relief uncovered in the palace of Sennacherib. Note the siege engine with its wheels on a paved road. Drawing by Judith Dekel..tif 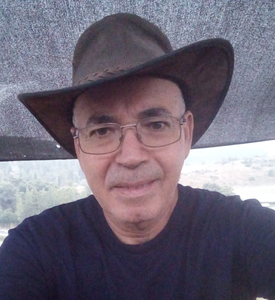