Barcelona, November 10, 2021-. A health impact assessment from the Barcelona Institute for Global Health (ISGlobal), a centre supported by the ”la Caixa” Foundation, has concluded that European cities could avoid an extra 114,000 premature deaths every year if they met the new air quality guidelines presented by the World Health Organization (WHO) in September 2021 compared to the previous guidelines.

These estimates are an update of a study originally published in January 2021 in The Lancet Planetary Health, in which ISGlobal researchers showed that European cities could avoid up to 51,000 premature deaths per year by meeting WHO’s previous air quality guidelines, which had been in place since 2005. After the publication of the new guidelines, the research team performed a new assessment of the mortality burden attributable to fine particulate matter (PM2.5) and nitrogen dioxide (NO2) in the same 1,000 European cities included in the original study. The overall results have been published in a letter in The Lancet Planetary Health, while the specific results for each city have been published on the ISGlobal Ranking of Cities website.

The updated results show that achieving the new air quality guidelines for PM2.5 would result in a 113% increase in the number of deaths that could be avoided in European cities compared to the previous air quality guidelines from 2005, avoiding 109,188 premature deaths each year. For NO2, achieving the new recommended levels could prevent up to 57,030 premature deaths, 56,130 more than the 900 avoidable deaths estimated for the former NO2, recommended levels.

Going further, meeting the lowest levels of PM2.5 and NO2 observed in any city, could prevent 125,000 and 79,000 annual premature deaths, respectively.

“Even though there is no safe exposure threshold below which air pollution becomes innocuous, these new results show how the new WHO global air quality guidelines offer a much better framework for protecting human health and prevent a large number of deaths”, says ISGlobal researcher Sasha Khomenko, first author of the study.

The new data show that the number of avoidable deaths is much higher if the new WHO reference levels are adopted as targets. This effect is much more noticeable in the case of NO2. Among the cities with the highest mortality attributable to this pollutant, Madrid would go from avoiding 206 annual deaths if the old WHO recommendations were met to avoiding 1,966 using the new targets. Antwerp would go from 22 avoidable annual deaths to 254; Turin from 34 to 562; Paris from 185 to 2,135; Milan from 103 to 1,864 and Barcelona from 82 to 1,554.

Nearly 100% of the population above recommended levels

One statistic that shows how far European cities have to go to achieve clean air is the percentage of the population living in areas with concentrations of air pollutants higher than those recommended by the WHO. While under the previous WHO recommendations this percentage was 84% for PM2.5 and 9% for NO2, under the new recommendations these figures rise to 99.8% and 99.7% of the urban population, respectively. It should be noted, however, that the study was based on air pollution data for 2015.

“Since the current levels of air pollution in European cities are putting more than 100,000 lives at stake every year, the EU should align its legislation to match the WHO recommendations”, says Mark Nieuwenhuijsen, senior author of the study and Director of the Urban Planning, Environment and Health Initiative at ISGlobal. “In turn, local, regional and national governments should set the reduction of air pollution as a priority. We urgently need to reduce fossil fuel use, remove private cars and add more green spaces in our cities. This will not only reduce air pollution, but also contribute to climate action, which is one of our highest priorities for humankind”, he adds.

From November 11, 2021, updated avoidable mortality data using the new WHO recommendations for the 1,000 cities included in the study will be available at www.isglobalranking.org, where the recently published ranking of mortality associated with lack of access to green space is also available.

The update of the WHO's air quality recommendations has not changed the position of the cities within the rankings of mortality associated with excess air pollution.

The ten cities with the highest mortality burden due to PM2.5:

The ten cities with the highest mortality burden due to NO2:

The ten cities with the lowest mortality burden attributable to PM2.5:

The ten cities with the lowest mortality burden attributable to NO2:

European cities could avoid an extra 114,000 premature deaths every year by meeting the new WHO air quality guidelines 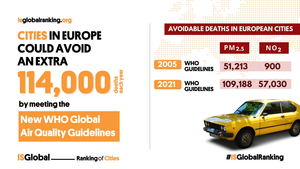 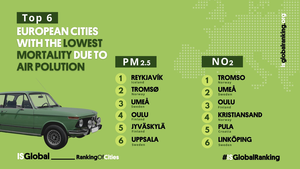 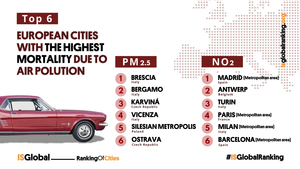