When sound was first incorporated into movies in the 1920s, it opened up new possibilities for filmmakers such as music and spoken dialogue. Physicists may be on the verge of a similar revolution, thanks to a new device developed at Stanford University that promises to bring an audio dimension to previously silent quantum science experiments.

In particular, it could bring sound to a common quantum science setup known as an optical lattice, which uses a crisscrossing mesh of laser beams to arrange atoms in an orderly manner resembling a crystal. This tool is commonly used to study the fundamental characteristics of solids and other phases of matter that have repeating geometries. A shortcoming of these lattices, however, is that they are silent.

“Without sound or vibration, we miss a crucial degree of freedom that exists in real materials,” said Benjamin Lev, associate professor of applied physics and of physics, who set his sights on this issue when he first came to Stanford in 2011. “It’s like making soup and forgetting the salt; it really takes the flavor out of the quantum ‘soup.’”

After a decade of engineering and benchmarking, Lev and collaborators from Pennsylvania State University and the University of St. Andrews have produced the first optical lattice of atoms that incorporates sound. The research was published Nov. 11 in Nature. By designing a very precise cavity that held the lattice between two highly reflective mirrors, the researchers made it so the atoms could “see” themselves repeated thousands of times via particles of light, or photons, that bounce back and forth between the mirrors. This feedback causes the photons to behave like phonons – the building blocks of sound.

“If it were possible to put your ear to the optical lattice of atoms, you would hear their vibration at around 1 kHz,” said Lev.

A supersolid with sound

Previous optical lattice experiments were silent affairs because they lacked the special elasticity of this new system. Lev, young graduate student Sarang Gopalakrishnan – now an assistant professor of physics at Penn State and co-author of the paper – and Paul Goldbart (now provost of Stony Brook University) came up with the foundational theory for this system. But it took collaboration with Jonathan Keeling – a reader at the University of St. Andrews and co-author of the paper – and years of work to build the corresponding device.

To create this setup, the researchers filled an empty mirror cavity with an ultracold quantum gas of rubidium. By itself, this is a superfluid, which is a phase of matter in which atoms can flow in swirls without resistance. When exposed to light, the rubidium superfluid spontaneously rearranges into a supersolid – a rare phase of matter that simultaneously displays the order seen in crystals and the extraordinary fluidity of superfluids.

What brought sound to the cavity were two carefully spaced concave mirrors that are so reflective that there is a fraction of 1 percent chance that a single photon would pass through them. That reflectivity and the specific geometry of the setup – the radius of the curved mirrors is equal to the distance between them – causes the photons pumped into the cavity to pass by the atoms more than 10,000 times. In doing so, the photons form a special tight bond with the atoms, forcing them to arrange as a lattice.

“The cavity we use provides a lot more flexibility in terms of the shape of the light that bounces back and forth between the mirrors,” said Lev. “It’s as if, instead of just being allowed to make a single wave in a trough of water, you can now splash about to make any sort of wave pattern.”

This special cavity allowed the lattice of superfluid atoms (the supersolid) to move about so that, unlike other optical lattices, it is free to distort when poked – and that creates sound waves. To initiate this launch of phonons through the flexible lattice, the researchers poked it using an instrument called a spatial light modulator, which enables them to program different patterns in the light they inject into the cavity.

The researchers assessed how this affected the contents of the cavity by capturing a hologram of the light that made its way out. The hologram records both the light wave’s amplitude and phase, allowing phonons to be imaged. In addition to mediating interesting physics, the high curvature of the mirrors inside the device produces a high-resolution image, like a microscope, which led the researchers to name their creation an “active quantum gas microscope.”

Graduate student and lead author Yudan Guo, who received a Q-FARM fellowship to support this work, led the effort to confirm the presence of phonons in the device, which was done by sending in different patterns of light, measuring what came out and comparing that to a Goldstone dispersion curve. This curve shows how energy, including sound, is expected to move through crystals; the fact that their findings matched it confirmed both the existence of phonons and the vibrating supersolid state.

There are many directions that Lev hopes his lab – and perhaps others – will take this invention, including studying the physics of exotic superconductors and the creation of quantum neural networks – which is why the team is already working to create a second version of their device.

“Open up a canonical textbook of solid-state physics, and you see a large portion has to do with phonons,” said Lev. “And, up until now, we couldn’t study anything built upon that with quantum simulators employing atoms and photons because we couldn’t emulate this basic form of sound.”

Stanford graduate students Ronen Kroeze and Brendan Marsh are also co-authors of this research. Lev is also a member of the Ginzton Lab and Stanford Bio-X. This research was funded by the Army Research Office, a Q-FARM Graduate Student Fellowship and the National Science Foundation.

An optical lattice with sound 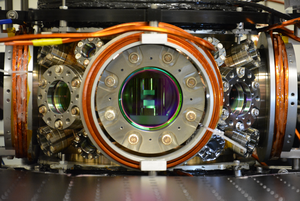