An international research team led by scientists from Nanyang Technological University, Singapore (NTU Singapore) has invented a ‘smart’ window material that controls heat transmission without blocking views, which could help cut the energy required to cool and heat buildings.

Developed by NTU researchers, the new energy-saving material for electrochromic (EC) windows that operates at the flick of a switch is designed to block infrared radiation - which is the major component of sunlight that emits heat.

The new material has a specifically designed nanostructure and comprises advanced materials like titanium dioxide (TiO2), tungsten trioxide (WO3), neodymium-Niobium (Nd-Nb), and tin (IV) oxide (SnO2). The composite material is intended to be coated onto glass window panels, and when activated by electricity, users would be able to ‘switch on and off’ the infrared radiation transmission through the window.

The invention, which featured alongside the front cover of the journal ACS Omega, could block up to 70 per cent of infrared radiation according to experimental simulations without compromising views through the window since it allows up to 90 per cent of visible light to pass through.

The material is also about 30 per cent more effective in regulating heat than commercially available electrochromic windows and is cheaper to make due to its durability.

Electrochromic windows are a common feature in ‘green’ buildings today. They work by becoming tinted when in use, reducing light from entering the room.

Commercially available electrochromic windows usually have a layer of tungsten trioxide (WO3) coated on one side of the glass panel, and the other, without. When the window is switched on, an electric current moves lithium ions to the side containing WO3, and the window darkens or turns opaque. Once switched off, the ions migrate away from the coated glass, and the window becomes clear again.

However, current electrochromic windows are only effective in blocking visible light, not the infrared radiation, which means heat continues to pass through the window, warming up the room.

Another drawback of the current technology is its durability, as the performance of the electrochromic component tends to degrade in three to five years. In lab tests, NTU’s electrochromic technology was put through rigorous on-off cycles to evaluate its durability Results showed the properties of the window retained excellent stability (blocked more than 65% of infrared radiation) demonstrating its superior performance, feasibility and costs saving potential for long-term use in sustainable buildings.

Lead author of the electrochromic window study, Associate Professor Alfred Tok of the NTU School of Materials Science and Engineering said, “By incorporating the specially designed nanostructure, we enabled the material to react in a ‘selective’ manner, blocking near infrared radiation while still allowing most of the visible light to pass through whenever our electrochromic window is switched on. The choice of advanced materials also helped improved the performance, stability and durability of the smart window.”

The new electrochromic technology may help conserve energy that would be used for the heating and cooling of buildings and could contribute to the future design of sustainable green buildings, say the research team.

The study reflects the university’s commitment to address humanity’s grand challenges on sustainability as part of the NTU 2025 strategic plan, which seeks to accelerate the translation of research discoveries into innovations that mitigate human impact on the environment.

Seeking to improve the performance of their smart window technology, the NTU team, in a separate work to that reported in the journal, created a switch system that helps to control conducted heat, which is the heat from the external environment.

The patented NTU switch comprises magnetic carbon-based particles and thin films that are good conductors of heat. When the switch is turned off, conducted heat cannot transfer through the window. When switched on, the heat will be allowed to pass through the glass window.

When integrated with the newly developed electrochromic material, the team’s smart window can control two types of heat transmission: infrared radiation and conduction heat, which is the main mode of heat transfer through matter.

First author of the study, Dr Ronn Goei, Senior Research Fellow at the NTU School of Materials Science and Engineering said, “By integrating both the new electrochromic material we invented and the patented switch in a window, we can create a smart window with unique capabilities. With the ability to control both infrared radiated heat from the sun and conducted heat passing through the window, we expect this technology to be particularly useful in temperate climates, as building occupants can use it to regulate heat loss or gain according to the needs of the changing seasons, while still enjoying much of the view.”

Co-author Professor Shlomo Magdassi from the Institute of Chemistry at the Hebrew University of Jerusalem, said, “The research outcome is expected to enable fabrication of unique windows that will result in energy savings. This is an excellent example of scientific collaboration between the researchers at NTU and The Hebrew University of Jerusalem, Israel, enabled by the CREATE programme of Singapore’s National Research Foundation.”

Moving forward, the research team hopes to take the invention from lab to market. It has partnered with glass manufacturer iGlass Asia Pacific for further tests, and to look at potentially incorporating the smart window into its projects for improved efficiency and sustainability.

Jeremy Sani, Director at iGlass Asia Pacific, a Singapore-based company specialising in innovative glass manufacturing, and the industry collaborator of the research study said, “It is our privilege and honour to take this innovation journey with NTU. While we have the commercial and application knowledge, NTU in-depth knowhow from a technical perspective has taken the execution of the project to the next level that is beyond our expectations.”

The international research team includes scientists from the Hebrew University of Jerusalem (HUJ), Israel, under the Singapore-HUJ Alliance for Research and Enterprise (SHARE) by Singapore’s National Research Foundation. 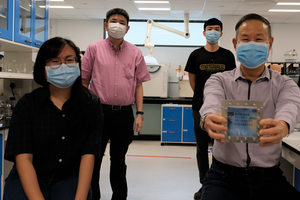 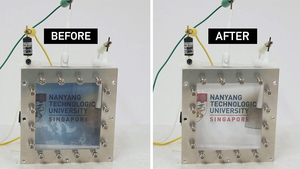