For the past five months, the European Commission-funded project ‘European Red List’ of Taxonomists has been reaching out to insect taxonomists to invite them to register at the Red List of Taxonomists portal.

Behind the project are the organisation uniting the most important and largest European natural science collections (CETAF), the world’s authority on assessing the risk of extinction of organisms: the International Union for Conservation of Nature (IUCN) and the scientific publisher with a long history in the biodiversity and ecology fields Pensoft.

“It’s never been as clear that the sustainability of our ecosystems and economies are tightly connected to how healthy our pollinators and other insects within the intricate web of life are. So, it is obvious that securing the constant flow of scientific knowledge shall be of utmost importance to everybody,” say the project partners.

“At the end of the day, it’s the experts who identify insects and investigate their abundance and diversity that are best equipped to inform the community - including the key decision-makers - about things like what native species are in urgent need of protection, which ones have recently started to diminish, and how to spot invasives well known for their harm on local biodiversity. The major problem, however, is that these experts are rapidly declining themselves.”

Having filled in their details, such as country of residence and activity, institutional affiliation, seniority and insect group of interest, over 1,200  participants provided valuable data necessary to estimate the actual number, location and profile of the insect taxonomists based or working in Europe. The final report - to be released in early 2022 - will also present past and future trends of expertise within the continent and across insect taxa. A comprehensive list of recommendations will shed light on where and what support is needed to prevent the ‘extinction’ of experts and their invaluable contributions to evidence-based conservation efforts.

In particular, the final recommendations are to highlight all key measures and tools expected to bridge the identified gaps at both national and pan-European level, including the use of relevant funding programmes. The report will also include an estimate of the associated efforts and costs.

In the meantime, a webinar taking place in January 2022 will bring together various specialists relevant to the field, including taxonomic experts, academics, CETAF members, and representatives of high-level organisations, such as the Intergovernmental Science-Policy Platform on Biodiversity and Ecosystem Services (IPBES), Convention on Biological Diversity, Global Taxonomy Initiative and the League of European Research Universities (LERU) to collect feedback and further input before the report and recommendations are made public.

CETAF is the European organization of Natural History Museums, Botanic Gardens and Research Centers with their associated natural science collections comprising 71 of the largest taxonomic institutions from 22 European countries (18 EU, 1 EEA and 3 non-EU), gathering expertise of more than 5,000 researchers. Their collections contain a wide range of specimens including animals, plants, fungi and rocks, and genetic resources which are used for scientific research and exhibitions. CETAF aims to promote training, research collaborations and understanding in taxonomy and systematic biology as well as to facilitate access to our natural heritage by sharing the information derived from the collections. Follow CETAF on Twitter, Facebook and LinkedIn.

IUCN (the International Union for Conservation of Nature) is a membership Union composed of both government and civil society organisations. It harnesses the experience, resources and reach of its more than 1,400 Member organisations and the input of more than 17,000 experts. This diversity and vast expertise makes IUCN the global authority on the status of the natural world and the measures needed to safeguard it. Follow IUCN on Twitter, Facebook and LinkedIn.

Pensoft is an independent academic publishing company and technology provider, well known worldwide for its novel cutting-edge publishing tools, workflows and methods for text and data publishing of journals, books and conference materials. Through its Research and Technical Development department, the company is involved in various research and technology projects. Founded in 1992 "by scientists, for scientists" and initially focusing on book publishing, Pensoft is now a leading publisher of innovative open access journals in taxonomy and biodiversity science. Follow Pensoft on Twitter, Facebook and LinkedIn. 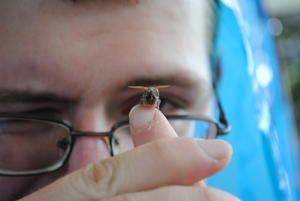