Corpora amylacea (CA) are complex aggregates described in different organs and tissues associated with ageing and degenerative processes. Described for the first time in 1779 by Giovanni Battista Morgagni in the prostate and in 1837 by Jan Evangelista Purkinje in the brain, these were named corpora amylacea (in Latin, starch bodies) by Rudolf Vichow in 1854 for their similiarities with this polysaccharide. However, more than two centuries after its discovery, its function and meaning are unknown yet.

An article now published in the journal Ageing Research Reviews answers many doubts about the origins and function of these bodies with the analysis of the similarities and differences of CA in different tissues and organs. The study has been carried out by a team of the Faculty of Pharmacy and Food Sciences, the Institute of Neurosciences of the University of Barcelona (UBNeuro), and the Center for Networking Biomedical Neurodegenerative Diseases (CIBERNED), led by the lecturers Carme Pelegrí and Jordi Vilaplana.

From corpora amylacea to wasteosomes

This study states that CA, created by specific cells, have waste substances or products that are packed in a glycan skeleton. Once they are created, the CA are expulsed to the external medium or the interstitial spaces, and in this case they are later phagocytosed by macrophages.

The waste products that are captured in the CA are of different types and origins, “which has generated some doubts in the study of these structures”, notes the lecturer Jordi Vilaplana, from the Department of Biochemistry and Physiology. “In the CA of the nervous system, for instance, compounds of neuronal, hematologic, and astrocytic origins have been described, even external substances related to fungal and microbial infections. In addition, these compounds are different from those found in the CA present in other organs and tissues. Therefore, the composition of the CA depends on the environment where these structures are formed”.

Despite this variety in its composition, what the CA do have in common is that all of them present a glycan structure ─which makes the container skeleton─ and that would explain why Rudolf Virchow named them corpora amylacea.

The name amylacea and amyloid are currently used not only to indicate it is similar to the starch but also to name certain insoluble fibrillar proteins that tend to precipitate, such as the beta-amyloid protein which forms amyloid plaques in the brain of people with Alzheimer’s. Surprisingly, some of these proteins are also found as waste products in some CA.

“Therefore, the name of corpora amylacea ─which indicates bodies similar to starch granules but which can also indicate bodies that contain amyloid proteins─, creates doubts and mistaken interpretations”, notes the lecturer Carme Pelegrí, from the Department of Biochemistry and Physiology. “Therefore, we suggest that we define these structures as ‘wasteosomes’. This term is more descriptive and puts the emphasis on its function of containing waste products instead of the ambiguous amiloyd properties”, highlight the lecturers Jordi Vilaplana and Carme Pelegrí.

How are CA and wasteosomes removed?

The study describes the synthesis of the CA, “a process with the participation of the ubiquitin protein ─a marker of waste substances─ and p62 ─an adaptor for waste processing─, apart from enzymes involved in the formation of the container skeleton, such as glycogen synthase, malin and laforin”, notes Marta Riba, first author of the paper.

The results reveal that the CA tend to create in cells of epithelial origins, located in bordering areas of the body and astrocytes located in the bordering areas of the brain. “The final destination of the CA will be different depending on the place and structure of origin”, notes Jaume del Valle, lecturer from the Department of Biochemistry and Physiology. “Gland epithelial cells take part in the CA formation in the prostate, and these bodies can be directly released in the external medium. In the brain, however, the CA generated by astrocytes are thrown into the cerebrospinal fluid that surrounds the brain and the spinal cord”.

Perspective changes in the research on CA

Currently, the presence of CA cannot be directly associated with any disease, although some diseases have featured an increase of the amount of these bodies.

“However, there is a strong correlation between ageing and the presence of CA, which could be explained due to an increase in the production of waste substances in this life stage combined with an uncoupling in certain mechanisms of cell cleaning, such as autophagy and the ubiquitin proteasome system”, say the authors.

“In this context, the presence or absence of certain substances in the CA could be used as a potential biomarker in biomedicine. This fact can be particularly important in diseases that affect the brain, since the CA created in the brain can be isolated with samples of cerebrospinal fluid and could provide information on this organ of the central nervous system, which is relatively hard to access”.

The research trajectory of the research team of UB-UBNeuro-CIBERNED has shed light in the study of nature and CA functions. Previous studies warned about the need to adapt and reach an agreement regarding experimental protocols for these research studies (Scientific Reports, 2017). They are also authors of the description of the expelling pathway of the brain CA to the cerebrospinal fluid, the transport to the lymphatic system and the following removal through macrophages (PNAS, 2019), and they have recently described the glucidic and non-proteic nature of neoepitopes ─antigenic determinant─ of the brain CA (Frontiers in Immunology, 2021). Designing new methodologies for studying with precision the composition of CA and determining whether the brain CA isolated with the cerebrospinal fluid can contain biomarkers of brain diseases are some of the research lines the team wants to promote.

From corpora amylacea to wasteosomes: history and perspectives

From ‘corpora amylacea’ to wasteosomes 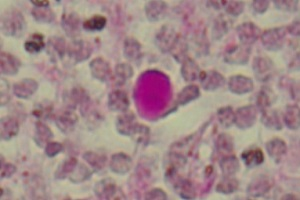