“Rolling Fingers” is the new robotic hand, designed by researchers of the School of Industrial Engineering of the University of Malaga that can move objects in a single grasp, with no need to use two arms, which is an advantage for many robot applications.

It is the first prototype of highly articulated adaptive fingers with a skin that is able to rotate around its axis at different speeds, and at the same time the finger can perform tendon-driven adaptive grasping actions. Its capability to safely manipulate non-rigid objects in-hand, that is, without dropping the object, adds great potential to any robotic arm and simplifies the process considerably.

“Before, when a mobile robot had to perform any task, whether industrial or clinical, it needed two hands. For instance, to check patients’ heart rate, it needed one to measure it and another to roll up the patient’s sleeve”, explains the Professor of Tele-robotics of the University of Malaga Jesús M. Gómez, the main author of this study.

This researcher clarifies that this new design, which adapts to the silhouette of the object it is grasping and can rotate, reduces the time required to perform any action and enables different types of movements. These characteristics make it optimum, as he says, for moving fruit and vegetable products or for industrial applications, such as piping installation.

“Rolling Fingers” has been developed within the UMA R&D&I line “Robotics for physical human-robot interaction”, in collaboration with the Mechanical Engineering Department of the University College London (United Kingdom).

At present, the prototype, published in the scientific journal IEEE Robotics and Automation Letters (RA-L), has three fingers, but researchers are already working on a four-finger prototype. “With at least three fingers providing two active degrees of freedom (grasping and axial rotation) we can create robotic graspers that are capable of moving objects in a controlled way during a single grasp”, says Gómez.

Likewise, as a next step, the researchers are committed to building a demo to be able to test it both at the industrial level and, in the long term, in human-robot interactions.

“Rolling fingers”, the robotic hand designed by the uma that moves objects in a single grasp 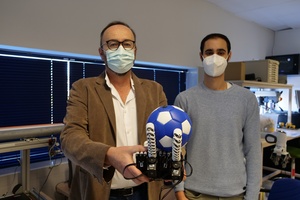 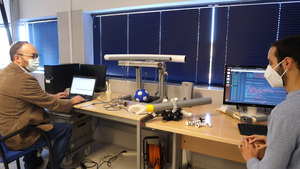 “Rolling fingers”, the robotic hand designed by the uma that moves objects in a single grasp