The inside of a cell is a busy, crowded place – full of proteins and other molecules colliding as they swirl through the cytosol, the fluid that fills the cell. The interactions between these molecules drive the cell’s activities. But when scientists study these interactions, they use a highly simplified system that doesn’t capture the complexity.

Now, researchers at Okinawa Institute of Science and Technology (OIST) have created membraneless droplets in which the density and movement of molecules is similar to that in living cells. The method, described in Nature Communications, allows researchers to study cellular reactions in a way that more closely reflects how molecules behave in a living cell, said Professor Paola Laurino, of OIST’s Protein Engineering and Evolution Unit, who led the work.

One key class of molecules in a cell is a type of protein called an enzyme. Enzymes’ job is to spark chemical reactions and regulate the rate at which they proceed. To study enzymes, researchers generally add them to a large volume of water-based buffer free of other molecules. Then they add the substrate – the protein upon which the enzyme acts – and watch the process run. In such a set-up, the buffer is extremely dilute. “It’s a good system because the enzyme is purified and we know 100% what’s inside,” Prof. Laurino said. “But we wanted to create a system that resembles the high macromolecular crowding of the cytosol and to see how this influences the activity of the enzymes.”

To create the droplets, Prof. Laurino and her collaborators, including scientists from ETH Zürich, Switzerland and Max Planck Institute for Dynamics and Self-Organization, Germany, mixed a polymer called polyethylene glycol (PEG) with a protein in an aqueous buffer. The PEG creates crowding in the fluid, which pushes tiny protein-rich droplets to separate out in the buffer. Then, the scientists added an enzyme to the mixture, which diffuses into the droplets. Because their contents are so concentrated, the droplets acted as reaction chambers in which the enzymes could do their jobs. The researchers tracked how quickly the reaction progressed in the droplets, as well as the physical properties of the molecules inside them.

When they added the enzyme lactate dehydrogenase to the solution, they found that the reaction occurs very efficiently—that is, at a very high metabolic rate, similar to that observed in microorganisms. “That means we can have a lot of energy in our droplets,” said Dr. Mirco Dindo, a researcher in Prof. Laurino’s laboratory.

The researchers then switched to a different enzyme called urease, which drives a change in pH during reaction.  This created a pH gradient inside the droplets that generated a strong flow of molecules within it. ”This phenomenon in cells is called cytoplasmic streaming, and it is a very important mechanism to mix and move things inside the cell,” said Dr. Dindo. “It’s very interesting for us that we can reproduce it in the lab.”

Because the researchers know how much protein and enzyme they added to the buffer, it is still a well-controlled reaction. “It is a step closer to the real picture” of what happens in the cell, said Prof. Laurino. “Now we have a controlled system which reproduces some of the characteristics of the cytosol. We can use it to methodically study different enzymes to see how features like protein crowding and metabolic rate influence their activity.” 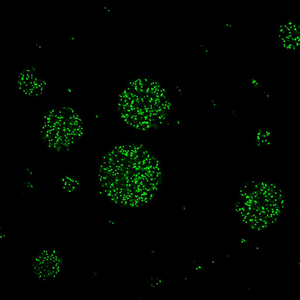