Nonspherical clusters of a small number of particles (CMs) have potential applications in coatings, material self-assembly, biomedical diagnostics. The sphere has the smallest surface area under a certain volume, that is, the total Gibbs free energy of the surface is the lowest. Therefore, most nanoparticles exhibit spherical shape, leading to difficult preparation of non-spherical CMs.

In a paper published on Langmuir, a novel method suggested by scientists from Hefei Institutes of Physical Science (HFIPS), Chinese Academy of Sciences (CAS) solved this problem. In their recent research, the team proposed one pot synthesis route to prepare colloidal molecules (CMs) demonstrated in various morphologies such as popcorn-like, CO2-like, NH3-like, CH4-like.

"Our method, basing on seed surface nucleation and growth, was for preparing CMs with different morphologies in one pot, so we called it one-pot method," explained Prof. TIAN Xingyou, who led the team. "The mechanism allowed CM synthesis without any seed pretreatment and monomer swelling process，which is very promising in the industrial scale production."

He further explained the forming process of different CMs. The surface of seeds, prepared with soap-free emulsion, was covered with initiators which could be used for subsequent styrene polymerization reaction to initiate monomer polymerization. It formed the intermediate nanoparticles with multiple nuclei. As for popcorn-like CMs, it's when cross-linking agent divinylbenzene (DVB) and styrene (ST) were added to seed dispersion simultaneously, DVB would make the PS chain cross-link to form a 3D network structure and hinder the fusion of the PS nuclei. When researchers just added styrene or there is a 1 h delay of cross-linking agent DVB addition compared to styrene addition, AXn-type CMs could be obtained. It's mainly because DVB, which was not introduced or introduced later, could not prevent the fusion process of multiple PS nuclei in the early stage.

"It proved that the shape and size of CMs can be tuned by changing the addition order and content of ST and DVB," said TIAN Xingyou, "It provided a good foundation for self-assembly."

According to this research result, seed pretreatment and monomer swelling can be avoided. This greatly shortens the fabrication time. The finding may lead the CMs fabrication towards salable and reliable direction. 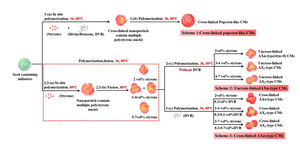 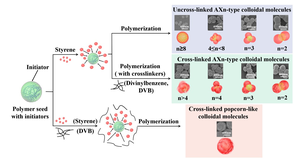