Filling in the links of the evolutionary chain with a fossil record of a ‘‘snake with four legs” connecting lizards and early snakes would be a dream come true for paleontologists. But a specimen formerly thought to fit the bill is not the missing piece of the puzzle, according to a new Journal of Systematic Palaeontology study led by University of Alberta paleontologist Michael Caldwell.

“It has long been understood that snakes are members of a lineage of four-legged vertebrates that, as a result of evolutionary specializations, lost their limbs,” said Caldwell, lead author of the study and professor in the departments of biological sciences and earth and atmospheric sciences.

“Somewhere in the fossil record of ancient snakes is an ancestral form that still had four legs. It has thus long been predicted that a snake with four legs would be found as a fossil.”

In a paper published in the journal Science in 2015, a team of researchers reported the discovery of what was believed to be an example of the first known four-legged snake fossil, an animal they named Tetrapodophis amplectus.

“If correctly interpreted based on the preserved anatomy, this would be a very important discovery,” said Caldwell.

Caldwell explained that the new study of Tetrapodophis revealed a number of mischaracterizations of the anatomy and morphology of the specimen — traits that initially seemed to be shared most closely with snakes, suggesting this might be the long-sought-after snake with four legs.

“There are many evolutionary questions that could be answered by finding a four-legged snake fossil, but only if it is the real deal. The major conclusion of our team is that Tetrapodophis amplectus is not in fact a snake and was misclassified,” said Caldwell. “Rather, all aspects of its anatomy are consistent with the anatomy observed in a group of extinct marine lizards from the Cretaceous period known as dolichosaurs.”

The clues to this conclusion, Caldwell noted, were hiding in the rock the fossil was extracted from.

“When the rock containing the specimen was split and it was discovered, the skeleton and skull ended up on opposite sides of the slab, with a natural mould preserving the shape of each on the opposite side,” said Caldwell. “The original study only described the skull and overlooked the natural mould, which preserved several features that make it clear that Tetrapodophis did not have the skull of a snake — not even of a primitive one.”

Although Tetrapodophis may not be the snake with four legs that paleontologists prize, it still has much to teach us, said study coauthor Tiago Simões, a former U of A PhD student, Harvard post- doctoral fellow and Brazilian paleontologist, who pointed out some of the features that make it unique.

“One of the greatest challenges of studying Tetrapodophis is that it is one of the smallest fossil squamates ever found,” said Simões. “It is comparable to the smallest squamates alive today that also have reduced limbs.”

An additional challenge to studying the Tetrapodophis is access to the specimen itself.

“There were no appropriate permits for the specimen’s original removal from Brazil and, since its original publication, it has been housed in a private collection with limited access to researchers. The situation was met with a large backlash from the scientific community,” said Simões.

“In our redescription of Tetrapodophis, we lay out the important legal status of the specimen and emphasize the necessity of its repatriation to Brazil, in accordance not only with Brazilian legislation but also international treaties and the increasing international effort to reduce the impact of colonialist practices in science.”

The study, “Tetrapodophis amplectus is not a snake: Reassessment of the osteology, phylogeny and functional morphology of an Early Cretaceous dolichosaurid lizard,” was published in the Journal of Systematic Palaeontology.

Tetrapodophis amplectus is not a snake: Reassessment of the osteology, phylogeny and functional morphology of an Early Cretaceous dolichosaurid lizard. 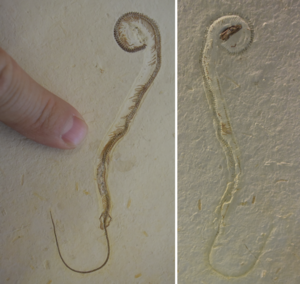