Climate change is causing rapid warming in the arctic and tropical regions where natural wetland store large pools of carbon and emit methane. As climate continues to warm, there is widespread concern that wetland methane emissions will increase and contribute even more to atmospheric greenhouse gases and climate change. Since 2007, atmospheric methane concentrations have increased at rapid rates, with 2020 having the largest observed methane increase since systematic measurements began. The precise causes are difficult to quantify because methane is emitted from a diverse number of natural and human-activities, and the removal of methane is from complex chemical processes. Here, using new data on methane stable isotopes, combined with thousands of potential emissions scenarios, a new study confirms that emissions from anthropogenic sources, including agriculture, landfill/waste, and fossil fuel industry, are clearly the driver for the renewed rise of the potent greenhouse gas since 2007, while global wetlands play a minor role with a contribution of less than 20%.

Methane is a powerful greenhouse gas with 80 times more warming potential than carbon dioxide over a 20-year period and responsible for almost half of the global warming since the industrial revolution. Methane is also a precursor to ground-level ozone pollution and thus tackling methane emissions would bring short-term climate benefits as well as improve air quality. Since 2007, atmospheric methane concentrations have been increasing rapidly, and even more so since 2014, and the causes for the increase have been debated in terms of the contribution from natural processes versus human activities.

The scientists tested a comprehensive set of emission scenarios using data from different greenhouse gas inventories and wetland models. They found that the emissions scenarios assuming large wetland methane increases did not match the observed atmospheric isotopic record. In contrast, the methane emission sources linked to human activities better matched the observed atmospheric isotopes. The work provides a detailed attribution of methane growth to agricultural emissions that increased by almost 20% from 2000 to 2017 driven by rising livestock populations, landfills and waste emissions rising by 10 million metric tonnes, largely attributing to an over 40% increase in the world urban populations from 2000 to 2017. The emissions from oil and natural gas industry have increased by 5 million metric tonnes with large uncertainty, and coal production increased by 40% globally from the same period.

“Increased human activities clearly emerge as the main cause of rising atmospheric methane concentrations. No evidence for strong natural feedback of climate on wetland methane emissions exists for now despite its potential dominant role in the future as the temperature goes higher”. says Zhen Zhang, an Earth-systems researcher at University of Maryland College Park who led this study.

“This study shows the value of observing methane isotope signatures as a technique to isolate and better understand methane sources. Sustained and strategic observations of methane over wetland regions are needed to detect climate change feedbacks, which become more likely each year as climate warms.” said Benjamin Poulter, a research scientist at NASA's Goddard Space Flight Center in Greenbelt, Maryland.

The recent 26th Conference of Parties to the United Nations Framework Convention on Climate Change also highlighted methane mitigation as an essential component to addressing climate change. This study demonstrates that mitigation in sectors dominated by human activities would have a significant impact on the growth of atmospheric methane.

Natural feedback or human activities? A new study points to agricultural and industrial sources as the main cause to the soaring atmospheric methane 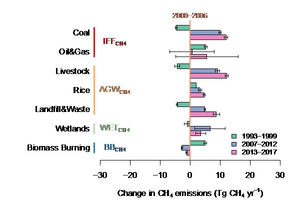 Attribution of rise of atmospheric methane by source types.