Scientists now understand how certain animals can feed on picturesque, orange monarch butterflies, which are filled from head to abdomen with milkweed plant toxins.

In high enough concentrations, milkweed can kill a horse, or a human. To be able to eat this plant, monarchs evolved a set of unusual cellular mutations. New UC Riverside research shows the animals that prey on monarchs also evolved these same mutations.

A Current Biology journal article, published today, describes the research that revealed these mutations in four types of monarch predators — a bird, a mouse, a parasitic wasp, and a worm.

Milkweed toxins target a part of animal cells called the sodium-potassium pump, which helps enable heartbeats and nerve firing. It’s so important in humans that our bodies use a third of all the energy we generate from food to power this pump. When most animals eat milkweed, the pump stops working.

Two years ago, Groen and his colleagues wrote about amino acid changes in three places on the pump that not only allow monarch butterflies to consume milkweed, but also to accumulate the milkweed toxins in their bodies as a defense against attacks. Groen’s team engineered these same amino acid changes in fruit flies, which then became as resistant to milkweed as monarchs.

“It’s been a very long-standing natural history observation that birds and mice are important monarch predators,” Groen said. “But in the 1970s, there weren’t the means to find out what enabled them to be successful at it. Now, with genome sequencing, we can.”

The researchers took DNA sequence information from databases for a variety of birds, wasps, and nematode worms to see if any of them evolved the amino acid changes in their sodium pumps. One of the four animals in which the team found the pump mutations includes the black-headed grosbeak, which eats up to 60% of the monarch butterflies in many colonies each year.

It’s unclear whether there are additional adaptations that help the grosbeak and other monarch predators deal with the toxins. Groen is planning to explore this question in future studies.

Time may be running out to learn the butterflies’ cellular secrets. Experts estimate monarch populations have declined dramatically, from roughly 500 million in the early 1990s to 100 million now.

“Climate change is threatening the Mexican forests where they migrate every winter to mate, and as the flock of butterflies gets smaller, they’re easier prey for birds and mice,” Groen said.

How to eat a poison butterfly 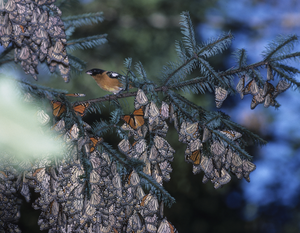