An international team of scientists may have solved a key mystery about the origins of the Earth’s water, after uncovering persuasive new evidence pointing to an unlikely culprit -- the Sun.

In a new paper published today in the journal Nature Astronomy, a team of researchers from the UK, Australia and America describe how new analysis of an ancient asteroid suggests that extraterrestrial dust grains carried water to Earth as the planet formed. The water in the grains was produced by space weathering, a process by which charged particles from the Sun known as solar wind altered the chemical composition of the grains to produce water molecules.

The finding could answer the longstanding question of just where the unusually water-rich Earth got the oceans which cover 70 percent of its surface – far more than any other rocky planet in our Solar System. It could also help future space missions find sources of water on airless worlds. Planetary scientists have puzzled for decades over the source of Earth’s oceans. One theory suggests that one type of water-carrying space rock known as C-type asteroids could have brought water to the planet in the final stages of its formation 4.6 billion years ago.

To test that theory, scientists have previously analysed the isotopic ‘fingerprint’ of chunks of C-type asteroids which have fallen to Earth as water-rich carbonaceous chondrite meteorites. If the ratio of hydrogen and deuterium in the meteorite water matched that of terrestrial water, scientists could conclude that C-type meteorites were the likely source.

The results weren’t quite that clear-cut. While some water-rich meteorites’ deuterium/hydrogen fingerprints did indeed match Earth’s water, many did not. On average, these meteorites’ liquid fingerprints didn’t line up with the water found in Earth’s mantle and oceans. Instead, Earth has a different, slightly lighter isotopic fingerprint.

In other words, while some of Earth’s water must have come from C-type meteorites, the forming Earth must have received water from at least one more isotopically-light source which originated somewhere else in the Solar System.

The University of Glasgow-led team used a cutting-edge analytical process called atom probe tomography to scrutinise samples from a different type of space rock known as an S-type asteroid, which orbit closer to the sun than C-types. The samples they analysed came from an asteroid called Itokawa, which were collected by the Japanese space probe Hayabusa and returned to Earth in 2010.

Atom probe tomography enabled the team to measure the atomic structure of the grains one atom at a time and detect individual water molecules.  Their findings demonstrate that a significant amount of water was produced just below the surface of dust sized grains from Itokawa by space weathering.

The early solar system was a very dusty place, providing a great deal of opportunity water to be produced under the surface of spaceborne dust particles.  This water-rich dust, the researchers suggest, would have rained down onto the early Earth alongside C-type asteroids as part of the delivery of Earth’s oceans.

Dr Luke Daly, of the University of Glasgow’s School of Geographical and Earth Sciences, is the paper’s lead author.  Dr Daly said: “The solar winds are streams of mostly hydrogen and helium ions which flow constantly from the Sun out into space. When those hydrogen ions hit an airless surface like an asteroid or a spaceborne dust particle, they penetrate a few tens of nanometres below the surface, where they can affect the chemical composition of the rock. Over time, the ‘space weathering’ effect of the hydrogen ions can eject enough oxygen atoms from materials in the rock to create H2O – water – trapped within minerals on the asteroid.

“Crucially, this solar wind-derived water produced by the early solar system is isotopically light. That strongly suggests that fine-grained dust, buffeted by the solar wind and drawn into the forming Earth billions of years ago, could be the source of the missing reservoir of the planet’s water.”

Prof. Phil Bland, a John Curtin Distinguished Professor at the School of Earth and Planetary Sciences at Curtin University and co-author of the paper said “Atom probe tomography lets us take an incredibly detailed look inside the first 50 nanometres or so of the surface of dust grains on Itokawa, which orbits the sun in 18-month cycles. It allowed us to see that this fragment of space-weathered rim contained enough water that, if we scaled it up, would amount to about 20 litres for every cubic metre of rock.”

Co-author Prof. Michelle Thompson of the Department of Earth, Atmospheric, and Planetary Sciences at Purdue University added: “It’s the kind of measurement that simply would not have been possible without this remarkable technology. It gives us an extraordinary insight into how tiny dust particles floating in space might help us balance the books on the isotopic composition of the Earth’s water, and give us new clues to help solve the mystery of its origins.”

The researchers took great care to ensure that the results of their testing were accurate, undertaking additional experiments with other sources to verify their results.

Dr Daly added: “The atom probe tomography system at Curtin University is world-class, but it had never really been used to for the sort of analysis of hydrogen we were undertaking here. We wanted to be sure that the results that we were seeing were accurate.  I presented our preliminary results at the Lunar and Planetary Science conference in 2018, and asked if any colleagues in attendance would help us validate our findings with samples of their own. To our delight, colleagues at the NASA Johnson Space Center and the University of Hawai‘i at Mānoa, Purdue, Virginia and Northern Arizona Universities, Idaho and Sandia national laboratories all offered to help. They gave us samples of similar minerals irradiated with helium and deuterium instead of hydrogen, and from atom probe results of those materials it quickly became clear that what we were seeing in Itokawa was extraterrestrial in origin.

“The colleagues that offered their support on this research really amounts to a dream team for space weathering, so we’re very excited by the evidence that we’ve collected. It could open the door to a much better understanding of what the early Solar System looked like and how the Earth and its oceans were formed.”

Professor John Bradley, of the University of Hawai‘i at Mānoa, Honolulu, a co-author of the paper, added: "As recently as a decade ago, the notion that solar wind irradiation is relevant to the origin of water in the solar system, much less relevant to Earth's oceans, would have been greeted with skepticism.  By showing for the first time that water is produced in-situ on the surface of an asteroid, our study builds on the accumulating body of evidence that the interaction of the solar wind with oxygen-rich dust grains does indeed produce water. Since dust that was abundant throughout the solar nebula prior to the onset of planetesimal accretion was inevitably irradiated, water produced by this mechanism is directly relevant to the origin of water in planetary systems and possibly the isotopic composition of Earth's oceans."

Their estimates of just how much water might be contained in space-weathered surfaces also suggest a way future space explorers could manufacture supplies of water on even the most seemingly arid planets.

Co-author Professor Hope Ishii of the University of Hawai’i at Mānoa said: “One of the problems of future human space exploration is how astronauts will find enough water to keep them alive and accomplish their tasks without carrying it with them on their journey. We think it’s reasonable to assume that the same space weathering process which created the water on Itokawa will have occurred to one degree or another on many airless worlds like the Moon or the asteroid Vesta. That could mean that space explorers may well be able to process fresh supplies of water straight from the dust on the planet’s surface. It’s exciting to think that the processes which formed the planets could help to support human life as we reach out beyond Earth.”

Dr Daly added: “NASA’s Artemis project is setting out to establish a permanent base on the Moon. If the lunar surface has a similar water reservoir sourced by the solar wind this research uncovered on Itokawa, it would represent an enormous and valuable resource to aid in achieving that goal.” 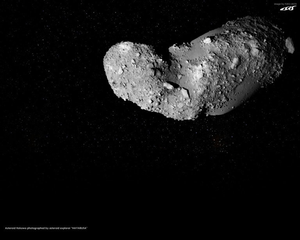