A unique "star" was discovered from the Ryukyu Islands, a biodiversity hot spot in subtropical Japan: a star-shaped structure that turned out to be the cocoon mass of a new species of parasitoid wasp. Researchers Shunpei Fujie (Osaka Museum of Natural History), So Shimizu, Kaoru Maeto (Kobe University), Koichi Tone (Okinawa Municipal Museum), and Kazunori Matsuo (Kyushu University) described this parasitoid wasp as a new species in the open-access Journal of Hymenoptera Research.

Parasitoid wasps parasitize a variety of organisms, mostly insects. They lay eggs in the host, a larva of hawk moth in this case, where the wasp larvae later hatch. After eating the host from the inside out, the larvae spin threads to form cocoons, in which they pupate, and from which the adult wasps eventually emerge.

Larvae of the newly discovered parasitoid wasp form star-shaped masses of cocoons lined up in a spherical pattern, suspended by a thread that can reach up to 1 meter in length. The structure, 7 to 14 mm wide and 9 to 23 mm long, can accommodate over 100 cocoons.

Despite its peculiarity, the wasp species constructing these masses had not been previously described: morphological observation and molecular analysis revealed that it was new to science. The authors aptly called it Meteorus stellatus, adding the Latin word for “starry” to its scientific name.

Thanks to the recent publication, we now have the first detailed report about the construction of such a remarkable cocoon mass in parasitoid wasps. We can also see what the process looks like, as the researchers were able to film the wasps escaping from the moth larvae and forming the star-shaped structure.

Why does M. stellatus form cocoons in such a unique structure?

The authors of the study believe this unique structure helps the wasps survive through the most critical time, i.e. the period of constructing cocoons and pupating, when they are exposed to various natural enemies and environmental stresses. The star shape most likely reduces the exposed area of individual cocoons, thus increasing their defense against hyper-parasitoids (wasps attacking cocoons of other parasitoid wasps), while the long thread that suspends the cocoon mass protects the cocoons from potential enemies like ants.

"How parasitoid wasps have evolved to form such unique masses instead of the common individual cocoons should be the next thing on our ‘to-research’ list," say the authors. 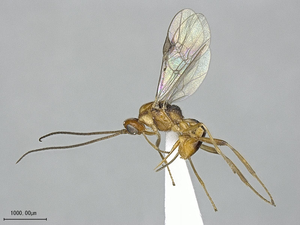 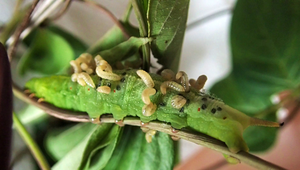 The larvae of Meteorus stellatus