A small guest molecule in the right place makes it possible to produce energy-efficient organic solar cells using eco-friendly solvents. A record efficiency over 17% is demonstrated. In addition, solar cells with larger areas can be produced. “This is a major step towards large-scale industrial manufacture of efficient and stable organic solar cells”, says Feng Gao, professor in the Department of Physics, Chemistry and Biology (IFM) at Linköping University. The result has been published in Nature Energy.

One challenge is to manufacture organic solar cells that are sufficiently stable to function for ten years or more. Another challenge is that the highest energy is achieved in solar cells manufactured in solutions that contain toxic solvents, with a relatively low boiling point. The low boiling point causes problems during the manufacture, since the solution evaporates slightly too rapidly. The use of more eco-friendly solvents with higher boiling points leads immediately to a decrease in energy efficiency. This is a dilemma that researchers all over the world are working to solve.

These problems have now been solved in a joint project led by researchers at Linköping University in Sweden and Soochow University in China.

They have managed to manufacture a solar cell, using a solution with a high boiling point and without any toxic ingredients, whose energy efficiency is better than 17%.
In addition, the green-solvent processed solar module with an area of 36 cm2 shows a power conversion efficiency over 14%. This is the highest efficiency reported to date for organic solar cell modules with an active area exceeding 20 cm2. Both of these breakthroughs are important for organic solar cell technology to make its commercial breakthrough at a large scale.

“Our results now open for the manufacture of organic solar cells at larger scales for outdoor use“, says postdoc Rui Zhang, who works with Professor Feng Gao in the Electronic and Photonic Materials Division, Linköping University.

The function of organic solar cells has improved step-by-step. When sunlight in the form of photons is absorbed in an organic semiconducting donor, an “excited state” forms. Electrons jump to a higher energy level and create holes at the lower energy level, to which they are, however, still attracted. The electrons are not fully freed, and a photocurrent does not arise. The researchers conducted experiments in which they added various acceptor materials, which accept electrons and thus allow them to become free, giving rise to a photocurrent.

A couple of years ago, Chinese researchers developed a new acceptor material, named Y6, which can deliver high efficiency for organic solar cells.

What the work described in this joint publication has now achieved is to find a guest molecule, known as BTO, that ensures that Y6 molecules in the solar cell are packed in such a close and stable manner in the green solvents that the photocurrent can be generated efficiently. Adding BTO also enables larger areas of the solar cells to be manufactured with high efficiency.

Read more about the research: https://liu.se/en/news-item/effektiva-organiska-solceller-for-utomhusbruk 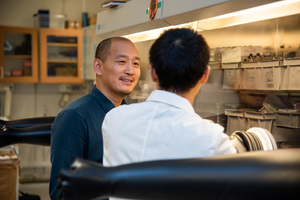