For the first time, computer scientists and mathematicians have used artificial intelligence to help prove or suggest new mathematical theorems in the complex fields of knot theory and representation theory.

The astonishing results have been published today in the pre-eminent scientific journal, Nature.

Professor Geordie Williamson is Director of the University of Sydney Mathematical Research Institute and one of the world’s foremost mathematicians. As a co-author of the paper, he applied the power of Deep Mind’s AI processes to explore conjectures in his field of speciality, representation theory.

His co-authors were from DeepMind – the team of computer scientists behind AlphaGo, the first computer program to successfully defeat a world champion in the game of Go in 2016.

Professor Williamson said: “Problems in mathematics are widely regarded as some of the most intellectually challenging problems out there.

“While mathematicians have used machine learning to assist in the analysis of complex data sets, this is the first time we have used computers to help us formulate conjectures or suggest possible lines of attack for unproven ideas in mathematics.”

In 2018 he was elected the youngest living Fellow of the Royal Society in London, the world’s oldest and arguably most prestigious scientific association.

“Working to prove or disprove longstanding conjectures in my field involves the consideration of, at times, infinite space and hugely complex sets of equations across multiple dimensions,” Professor Williamson said.

While computers have long been used to generate data for experimental mathematics, the task of identifying interesting patterns has relied mainly on the intuition of the mathematicians themselves.

That has now changed.

Professor Williamson used DeepMind’s AI to bring him close to proving an old conjecture about Kazhdan-Lusztig polynomials, which has been unsolved for 40 years. The conjectures concern deep symmetry in higher dimensional algebra.

Co-authors Professor Marc Lackeby and Professor András Juhász from the University of Oxford have taken the process a step further. They discovered a surprising connection between algebraic and geometric invariants of knots, establishing a completely new theorem in mathematics.

In knot theory, invariants are used to address the problem of distinguishing knots from each other. They also help mathematicians understand properties of knots and how this relates to other branches of mathematics.

While of profound interest in its own right, knot theory also has myriad applications in the physical sciences, from understanding DNA strands, fluid dynamics and the interplay of forces in the Sun’s corona.

Professor Juhász said: “Pure mathematicians work by formulating conjectures and proving these, resulting in theorems. But where do the conjectures come from?

“We have demonstrated that, when guided by mathematical intuition, machine learning provides a powerful framework that can uncover interesting and provable conjectures in areas where a large amount of data is available, or where the objects are too large to study with classical methods."

Professor Lackeby said: “It has been fascinating to use machine learning to discover new and unexpected connections between different areas of mathematics. I believe that the work that we have done in Oxford and in Sydney in collaboration with DeepMind demonstrates that machine learning can be a genuinely useful tool in mathematical research.”

Lead author from DeepMind, Dr Alex Davies, said: “We think AI techniques are already sufficiently advanced to have an impact in accelerating scientific progress across many different disciplines. Pure maths is one example and we hope that this Nature paper can inspire other researchers to consider the potential for AI as a useful tool in the field."

Professor Williamson said: “AI is an extraordinary tool. This work is one of the first times it has demonstrated its usefulness for pure mathematicians, like me.”

“Intuition can take us a long way, but AI can help us find connections the human mind might not always easily spot.”

“My hope is that AI can provide another axis of intelligence for us to work with, and that this new axis will deepen our understanding of the mathematical world.”

DOWNLOAD photos of Professor Geordie Williamson at this link.

This research was funded by DeepMind, which is owned by Alphabet Inc, the parent company of Google. 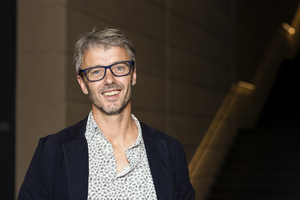