Many patients living with HIV in rural Africa are not receiving regular treatment, despite recent efforts to increase access to health care across the continent.

Researchers with the University of Cincinnati found that 28% of HIV-positive patients age 15 and older in eastern and southern Africa and 42% of patients in western and central Africa were not receiving the latest antiretroviral therapy.

The findings demonstrate the challenges of serving rural populations, particularly during the COVID-19 pandemic. The study concluded that improving access to health care is key to reducing the incidence of HIV.

“A large number of people living with HIV in Africa are lacking treatment and care, particularly the latest antiretroviral therapy, due to limited health-related resources,” said Hana Kim, a doctoral student in UC’s College of Arts and Sciences and lead author of the study.

The study was published in the journal PLOS Global Public Health.

Africa is bigger geographically than many people realize. The United States could fit inside Africa three times over. Providing health care to rural populations is an especially daunting challenge, Kim said.

African countries have not only an outsize geography but also disproportionate rates of HIV compared to global averages. HIV infection remains a leading cause of death in sub-Saharan Africa, which has the highest number of new infections in the world.

The United Nations Program on AIDS in 2015 announced a goal of boosting HIV diagnosis and treatment by 2020 in a bid to end the scourge of AIDS by 2030. The effort recognized that expanded access to treatment is crucial for success.

“Access to the nearest health care facility is one of the most important measures for HIV treatment success,” said co-author Diego Cuadros, an assistant professor and director of UC’s Health Geography and Disease Modeling Lab.

The study is an international collaboration between UC and scientists in Zimbabwe and Dubai as well as Oregon State University.

Researchers created maps of sub-Saharan Africa identifying populations living within a 10-, 30- and 60-minute walk or drive. They found that 1.5 million people living with HIV lived more than an hour’s drive from the nearest health facility.

The study identified disparities in the availability of care across countries. People living in more than 90% of Sudan and Mauritania had to drive more than an hour for health services.

In 17 countries, about half of the population with HIV live in places with limited access to health care, the study found.

And in Kenya, Rwanda and Burundi, almost nobody has to drive more than an hour to the nearest clinic, doctor’s office or hospital for treatment.

The study concluded that expanding health care in these underserved communities could improve not just HIV response but the response to the COVID-19 pandemic and other public health issues as well.

“The massive global health crisis of COVID-19 and associated travel restrictions have presented enormous challenges for accessibility to health care for people living with HIV,” the study found. “Unfortunately, people living with HIV are at a higher risk of COVID-19 infection and they suffer more acute symptoms than the general population due to having a weakened immune system and lacking access to health services.”

Another consideration is the transportation infrastructure in rural Africa. Kim said public transportation is not readily available in some rural areas while storm-damaged roads and bridges can temporarily limit access. Mobile health care has often filled the void in these areas, she said.

“This strategy has already worked in some countries in Africa such as Malawi and South Africa,” Kim said.

Cuadros said the pandemic has disrupted many of these mobile strategies over the past two years.

“It is expected that health outcomes linked to HIV have worsened during this past year in Africa,” Cuadros said.

The study was funded by grants from the National Institutes of Health. 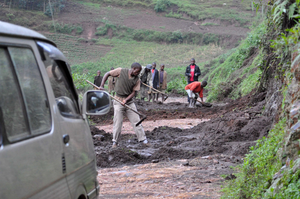 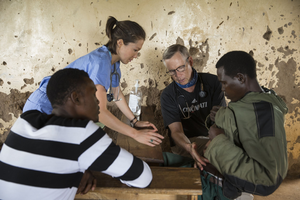 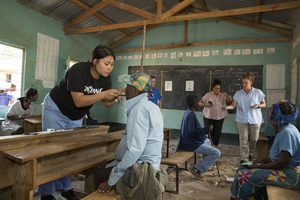