Controlling signal transmission and reception within the brain circuits is necessary for neuroscientists to achieve a better understanding of the brain’s functions. Communication among neuron and glial cells is mediated by various neurotransmitters being released from the vesicles through exocytosis. Thus, regulating vesicular exocytosis can be a possible strategy to control and understand brain circuits.

However, it has been difficult to freely control the activity of brain cells in a spatiotemporal manner using pre-existing techniques. One is an indirect approach that involves artificially controlling the membrane potential of cells, but it comes with problems of changing the acidity of the surrounding environment or causing unwanted misfiring of neurons. Moreover, it is not applicable for use in cells that do not respond to the membrane potential changes, such as glial cells.

To address this problem, South Korean researchers led by Director C. Justin LEE at the Center for Cognition and Sociality within the Institute for Basic Science (IBS) and professor HEO Won Do at Korea Advanced Institute of Science and Technology (KAIST) developed Opto-vTrap, a light-inducible and reversible inhibition system that can temporarily trap vesicles from being released from brain cells. Opto-vTrap directly targets transmitters containing vesicles, and it can be used in various types of brain cells, even the ones that do not respond to membrane potential changes.

In order to directly control the exocytotic vesicles, the research team applied a technology they previously developed in 2014, called light-activated reversible inhibition by assembled trap (LARIAT). This platform can inactivate various types of proteins when illuminated under blue light by instantly trapping the target proteins, like a lariat. Opto-vTrap was developed by applying this LARIAT platform to vesicle exocytosis. When the Opto-vTrap expressing cells or tissues are shined under blue light, the vesicles form clusters and become trapped within the cells, inhibiting the release of transmitters.

Most importantly, the inhibition triggered using this new technique is temporary, which is very important for neuroscience research. Other previous techniques that target vesicle fusion proteins damage them permanently and disable the target neuron for up to 24 hours, which is not appropriate for many behavioral experiments with short time constraints. By comparison, vesicles that were inactivated using Opto-vTrap decluster in about 15 minutes, and the neurons regain their full functions within an hour.

Opto-vTrap directly controls the signal transmitters' release, enabling the researchers to freely control brain activity. The research team verified the usability of Opto-vTrap in cultured cells and brain tissue slices. Furthermore, they tested the technique in live mice, which enabled them to temporarily remove fear memory from fear-conditioned animals.

In the future, Opto-vTrap will be used to uncover complex interactions between multiple parts of the brain. It will be a highly useful tool for studying how certain brain cell types affect brain function in different circumstances.

Professor Heo stated, "Since Opto-vTrap can be used in various cell types, it is expected to be helpful in various fields of brain science research,” He explained, “We plan to conduct a study to figure out the spatiotemporal brain functions in various brain cell types in a specific environment using Opto-vTrap technology.”

“The usability of Opto-vTrap can extend not only to neuroscience but also to our lives,” explains Director Lee. He added, “Opto-vTrap will contribute not only to elucidate brain circuit mapping but also epilepsy treatment, muscle spasm treatment, and skin tissue expansion technologies.”

This research was published on November 30 in the journal Neuron (IF:17.173).

Learn more about this research at: https://youtu.be/Ltd4cXGXU34 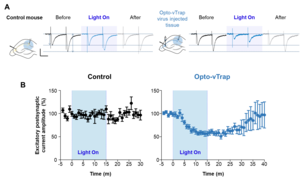