On 26 August 2021, the Japanese Cabinet passed a bill to discharge treated Fukushima nuclear accident contaminated water into the Pacific Ocean to alleviate the problem of nuclear wastewater storage. However, large amounts of radionuclides can affect marine biological chains when inhaled by marine life and adversely influence marine fisheries and human health. The global effects of Fukushima discharge, which will last 30-40 years, remain unknown. Thus, identifying the diffusion process of radioactive water in oceans is critical.

To solve this problem, a team from Tsinghua University, China, developed analysis models from both macroscopic and microscopic perspectives, to simulate the diffusing process of the nuclear elements. The former one focuses on the overall distribution of pollutant, while the latter focuses on the behaviour of individual pollutant. Macro simulation results (Figure b) revealed that in the early stages of pollutant discharge, the polluted area increases rapidly, reaching 30° of latitude × 40° of longitude within 120 days. Due to ocean currents, the pollutant diffusion speed is considerably higher in the latitude direction than that in the longitude direction. In 1200 days, the pollutants will cover almost the whole North Pacific region, reaching as far as the coast of North America to the east, and the Australia to the south. The pollutants will then spread rapidly to the South Pacific Ocean, under the influence of the equatorial current along the Panama Canal. The Indian Ocean will also be influenced, due to the waters infilling from north of Australia, in 2400 days. On day 3600, the pollutants will cover almost the entire Pacific Ocean. Notably, although the contaminated water is discharged near the Japanese island, the contamination center (represented by yellow and red in Fig. b and c) will over time move eastward along the 35°N latitude line.

The team plotted the pollutant concentrations in adjacent waters of Miyazaki, Shanghai and San Diego, all near 30°N, as shown in Figure d. Miyazaki gets polluted first, followed by Shanghai and San Diego, in order of their distances from Fukushima. According to the trend of the three curves, the pollutant concentration in each region increases rapidly at the beginning before stabilization. Although San Diego is the last city among the three to be affected, the steady-state concentration of pollutants in its adjacent waters is even higher than that near Miyazaki.

The differences in pollutant concentrations near Miyazaki, Shanghai and San Diego result from the strong ocean current near Japan. Specifically, Fukushima is located at the confluence of Kuroshio (northward) and Oyashio (southward). Therefore, most pollutants do not migrate towards north and south along the land edges but spread eastward with the North Pacific west wind drift. In the early stage of treated water discharge, its impact on the coastal Asia should be focused. However, at a subsequent stage, the high concentration of nuclear elements near North America will definitely become a concern.

How far is Fukushima nuclear accident contaminated water from us? 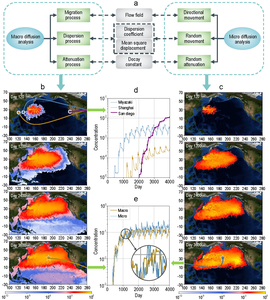 Methods and simulation results of macroscopic and microscopic diffusion analyses.