You don’t have to go far to find ticks. Just step outside and look for some grass. Look to the top of the shiny, green blade – usually ankle high. A tick might be there, waiting.

If something breathing brushes up against grass, the tick takes something similar to a needle – called its hypostome, which has dozens of fishing hook barbs - and inserts it into the skin. If unnoticed, Lyme disease could be transferred to its host after about 24 hours of feeding.

Virginia Tech researchers discovered that the bacterium that causes Lyme disease has a highly unusual modification in its protective molecular bag – its peptidoglycan, which is common to all bacteria.

“We believe this change is critical to how the bacterium causes disease and is something that we can exploit for both therapeutic and diagnostic purposes,” said Brandon Jutras, an assistant professor of Biochemistry in the College of Agriculture and Life Sciences and an affiliated faculty of the Fralin Life Sciences Institute and the Center for Emerging, Zoonotic, and Arthropod-Borne Pathogens.

The findings were recently published in Nature Microbiology, which is produced by Nature Portfolio, and the research is the result of four years of work on ticks and Lyme disease, for which Jutras has been widely lauded.

“Partaking in this research was the most engaging and rewarding experience of my academic career at Virginia Tech,” said lead author Tanner DeHart ’20 and ’21, who earned his undergraduate and master’s in biochemistry at Virginia Tech and is now a Ph.D. student at Harvard University. “This opportunity allowed me to hone my scientific skill-set, develop as a more independent researcher, and obtain first-hand experience with many experimental techniques and designs.”

Over the past two decades, the United States has experienced a dramatic increase in both the number of reported cases and the geographic distribution of Lyme disease. In the state of Virginia, the disease is transmitted by the bite of blacklegged ticks, which are infected with the Lyme disease-causing bacterium Borrelia burgdorferi.

In 2019, Jutras discovered that B. burgdorferi sheds peptidoglycan once it invades the human body. Although all bacteria have peptidoglycan, many do not shed the substance.

The bacterium that causes Lyme disease is different. It has oddities in how it makes its peptidoglycan and its components.

The sugar that B. burgdorferi puts into its peptidoglycan is a breakdown product of chitin, a structural carbohydrate with bonded sugar molecules made from modified glucose. Chitin is a critical component of ticks.

“The remarkable thing here is that the bacteria that causes Lyme disease is sucking up a breakdown product of its tick vector and uses it to help make this unusual molecule,” said Jutras, also an affiliate of the Translational Biology, Medicine, and Health Graduate Program at Virginia Tech. “What's more fascinating is that it appears that the bacterium has evolved this fine-tuned adaptation to make it move effectively, which is a feature required for disease.”

This adaptation makes the bacteria one of the fastest organisms on the planet in terms of how it can move.

From a technical standpoint, identifying the sugar, chitobiose – the breakdown product of chitin – was the crux of the research and discovery.

In doing so, they figured out why the bacterium has this modification.

The way B. burgdorferi moves is by spiraling – or torquing – their own body using flagellum. The flagellum is essentially a propeller, but on the outside of the bag. The propeller cranks against this big molecular bag, and, as a result, propels itself forward. This type of strategy allows them to move through muscle tissue, even cartilage, fairly easily.

Why is the sugar modification so important? It allows the bag to be more flexible and withstand the torque.

The team used atomic force microscopy to probe the elasticity of the peptidoglycan.

“The material is much more flexible and elastic in the sense that allows them to propel themselves,” Jutras said. “If they don't have that modification, the material comes much stiffer, and the ability to move is impaired.”

Previously, it had been theorized that this bacterium needs to be flexible, but it was never known how or why.

“We need to understand this mechanism because it would be a perfect target for therapy,” Jutras said. “We know one way – when it's in the tick. But how does it make this modification when it’s in a human? There’s minimal to no chitin in a human. When we impair the bacterium’s ability to suck up chitobiose, they still have this modification. There’s just much less of it.”

In the state of Virginia, the disease is transmitted by the bite of blacklegged ticks, which are infected with the Lyme disease-causing bacterium Borrelia burgdorferi. Photo by Max Esterhuizen for Virginia Tech.

A long and winding road

Jutras’ previous research has shown that peptidoglycan in B. burgdorferi lingers in the bodies of Lyme arthritis patients after the bacteria has entered the body. Weeks to months after the initial infection, the peptidoglycan remains, inciting inflammation and pain.

The lab discovered a protein associated with the peptidoglycan of Borrelia burgdorferi that plays an amplifying role in causing inflammation in Lyme arthritis patients by acting as a molecular beacon that antagonizes the patients’ immune system.

The new discovery by Jutras and his team may explain why the peptidoglycan can hang out and cause arthritis in Lyme patients. Human bodies cannot process the peptidoglycan of B. burgdorferi like it can the trillions of bacteria in and on human bodies.

“From the perspective of a bacteriologist, this is a paradigm shift in how we understand peptidoglycan, an essential molecule produced by virtually all bacteria and the most common antibiotic target,” Jutras said.

Since nearly no other bacteria have peptidoglycan quite like B. burgdorferi, it is an attractive biomarker for diagnostics. Biomarkers are unique molecular signatures, like hashtags, that act as an indicator that something has gone awry in a system and are often used to diagnose different forms of cancer.

This previous research and discovery directly led to the discovery of the self-altering properties of B. burgdorferi and its potential diagnostic methods. The new avenues of research are focused on this very unusual molecule and the bacteria that sheds these molecules.

“As diagnostics goes, that's an exciting new area of research for the lab as it relates to this discovery because this is a very unusual molecule,” Jutras said. “The bacterium sheds these molecules and this discovery could lead to developing a diagnostic tool focused on detecting this unusual molecule, much like a biomarker for Lyme disease. An approach that could make Lyme disease diagnosis as simple as a COVID-19 rapid test.”

Unraveling the mystery of the most reported vector disease in the country is progressing.

In the meantime, don’t stop doing those tick checks.

The research is made possible by the Steven & Alexandra Cohen Foundation, the National Institutes of Health, and the Bay Area Lyme Foundation. 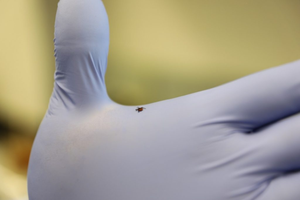