Coccolithophores are microscopic algae that form tiny limestone plates, called coccoliths, around their single cells. The shape and size of coccoliths varies according to the species. After their death, coccolithophores sink to the bottom of the ocean and their coccoliths accumulate in sediments, which faithfully record the detailed evolution of these organisms over geological time. A team of scientists led by CNRS researchers1 show, in an article published in Nature on the 1st December 2021, that certain variations in Earth’s orbit have influenced the evolution of coccolithophores. To achieve this, no less that 9 million coccoliths, spanning an interval of 2.8 million years and several locations in the tropical ocean, were measured and classified using automated microscope techniques and artificial intelligence. The researchers observed that coccoliths underwent cycles of higher and lower diversity in size and shape, with rhythms of 100 and 400 thousand years. They also propose a cause: the more or less circular shape of Earth’s orbit around the Sun, which varies at the same rhythms. Thus, when Earth’s orbit is more circular, as is the case today (this is known as low eccentricity), the equatorial regions show little seasonal variation and species that are not very specialised dominate all the oceans. Conversely, as eccentricity increases and more pronounced seasons appear near the equator, coccolithophores diversify into many specialised species, but collectively produce less limestone. Crucially, due to their abundance and global distribution, these organisms are responsible for half of the limestone (calcium carbonate, partly composed of carbon) produced in the oceans and therefore play a major role in the carbon cycle and in determining ocean chemistry. It is therefore likely that the cyclic abundance patterns of these limestone producers played a key role in ancient climates, and may explain hitherto mysterious climate variations in past warm periods. In other words, in the absence of ice, the biological evolution of micro-algae could have set the tempo of climates. This hypothesis remains to be confirmed.

Cyclic evolution of phytoplankton forced by changes in tropical seasonality 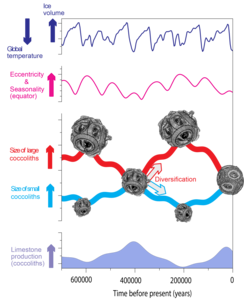