The months-long rainy season, or monsoon, that drenches northwestern Mexico each summer, reaching into Arizona and New Mexico and often as far north as Colorado and Northern California, is unlike any monsoon in the world, according to a new analysis by an earth scientist from the University of California, Berkeley.

The so-called North American monsoon is important for delivering water to semi-arid areas of the American Southwest — 50% of Arizona's and New Mexico's precipitation comes from monsoon rains between July and September — but in recent years has also fueled wildfires around the West. The northern tail of the monsoon sometimes brings thunderstorms and thousands of lightning strikes to California, igniting wildfires.

The word monsoon conjures images of the monsoons of South Asia, where for several months each summer repeated downpours flood India and Bangladesh. These and other monsoons, such as those in Brazil and across Africa, are generated when intense summer sunlight causes the atmosphere to be heated over the continent more than over the nearby ocean, which draws humid air from the sea and dumps the moisture on land during intense storms.

But detailed supercomputer simulations of North American weather patterns show that the North American monsoon occurs when Mexico's Sierra Madre Occidental mountains divert the eastward-trending jet stream toward the equator and then upward over the mountain slopes, cooling the moist tropical air from the eastern Pacific until it condenses and falls as rain.

This new understanding of the causes of the North American monsoon will have a major impact on forecasts in the region, said William Boos, UC Berkeley associate professor of earth and planetary science and first author of a paper detailing the findings that appeared last week in the journal Nature. The path of the mid-latitude jet stream, which is predicted to change as a result of global warming, and the warmth of the tropical eastern Pacific Ocean are now seen as more important in determining the monsoon than the temperature difference between land and ocean bordering western Mexico.

"What we're arguing is that the North American monsoon is not a classic monsoon in terms of its central physics, and so we need to look at a whole different set of scientific processes to predict it, both in short-term weather forecasts and long-term climate projections," said Boos, who collaborated with Salvatore Pascale of the University of Bologna in Italy.

"The previous thinking was that you need to look at how hot the land is compared to the ocean and the future of the ocean: Is the Pacific going to warm more than the land? If it does, then the monsoon might weaken in coming decades," he added. "Now, we're saying, 'No. Instead, you need to worry about whether the jet stream is going to shift.' If the ocean does warm more than land, that might give you more water content in the atmosphere to condense as it goes over the mountain, and that might strengthen the monsoon, instead of weaken it."

This is the only monsoon known to be caused mechanically — by the southward and upward deflection of a jet of air by an obstacle — as opposed to thermally, where less dense air becomes buoyant, rises and draws in air from surrounding areas.

Monsoons, Boos said, are continent-size atmospheric wind patterns that control the climate of large swaths of Earth’s surface and supply water to billions of people. The North American monsoon, for example, is crucial for the hydrology of western Mexico and the southwestern U.S.

But while the North American monsoon has been examined by scientists for over a century, its cause has been presumed similar to that of other monsoons, which have been more thoroughly studied. A typical monsoon results from differential heating of land and water during summer months. While the sea is able to mix below the surface the energy it absorbs from summer sunlight, the land cannot. As a result, the land quickly transfers this energy back to the atmosphere, heating the air and making it rise. As it rises, the pressure drops, the air cools, and the moisture it contains condenses into rain.

Boos wanted to test that scenario, using a global climate computer model that incorporates North American weather patterns, as well as the underlying land topography, with a resolution of about 25 kilometers, a big increase over earlier models that, because of computational limitations, were limited to a resolution of about 100 kilometers. With a 100-kilometer grid pattern, land and weather patterns are averaged over 10,000 square kilometers, smearing out the effects of small mountain ranges like the Sierra Madre.

"The mountains on the west coast of Mexico may seem enormous when you stand next to them as a human being, but on a global scale, they are tiny," he said. "Computer simulations of Earth’s atmosphere and ocean have historically barely been able to represent these mountains — it’s like trying to look at the details of an actor’s teeth on 1970s television. But our observations of wind and rain patterns have gotten much more high-resolution than in the past. We were able to use similarly high-resolution computer models to examine the detailed structure and dynamics of this monsoon and figure out how it works."

Boos' model — which he ran at the National Energy Research Scientific Computing Center at Lawrence Berkeley National Laboratory and was so computationally intensive that it took the equivalent of a laptop running for 1 million hours — is the first to study the effect of the Sierra Madre. He found that if the Sierra Madre were missing, the monsoon would basically evaporate.

"When we got rid of the Sierra Madre, the main part of the intense precipitation maximum that runs about a thousand kilometers up and down the west coast of Mexico and extends into the southwest U.S. just vanished," he said.

He and Pascale also did a theoretical calculation to quantitatively predict how jet stream winds would change if mountain ranges were put in their path, without applying any sort of heating, and found that the mountains produce stationary waves identical to those observed to occur in the jet stream as it interacts with the Sierra Madre Occidental.

"That helped us isolate the cause. You can do modeling experiments with the supercomputer, but there's so much going on in the supercomputer simulation you don't know what the fundamental cause is," Boos said. "But with this theoretical solution, we could say, 'Ah, the cause is definitely the mountain blocking the winds, instead of anything to do with water condensation or radiative transfer, et cetera.'"

Boos is exploring in more detail the impact on the monsoon of the Sierra Madre, as well as the Sierra Nevada range in California and the Rocky Mountains, focusing more closely on the effects in Arizona and New Mexico.

"This is really just the first study suggesting that the North American monsoon is so fundamentally linked to the blocking of winds by mountain ranges," he said. "We certainly need to explore this more observationally, theoretically, and with even higher-resolution models."

Mechanical forcing of the North American monsoon by orography

Summer rains in American Southwest are not your typical monsoon 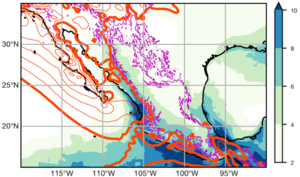