Ivermectin is an effective treatment for hookworm in the endangered Australian sea lion, University of Sydney research has found.

Hookworm infection contributes to up to 40 per cent of pup deaths. In December last year, the species was reclassified as ‘endangered’ due to a 64 percent reduction in offspring over three generations. With fewer than 10,000 of these Australian-native animals remaining, making them a federal government conservation priority, the results are welcome news.

While ivermectin recently gained notoriety as an unproven prophylactic and therapy for COVID-19 (coronavirus), it has long been used in both human and veterinary medicine as a highly effective treatment for parasitic infections.

In the Australian sea lion, topical ivermectin has now been shown to be highly effective against hookworm infection, with an effectiveness rate of 96.4 percent – comparable to the injected formulation (96.8 percent).

All Australian sea lion pups become infected with hookworm through ingesting larvae in their mother’s milk within 48 hours of birth.

Researchers believe the demonstrated effectiveness of this minimally invasive and easily applied treatment option for hookworm is the next step in a disease management strategy to assist the conservation of this endangered species. The findings have been published in the International Journal for Parasitology: Parasites and Wildlife.

During the 2017 Australian sea lion breeding season at Dangerous Reef, South Australia, the researchers conducted a trial whereby a group of 85 pups aged between 10 and 21 days were either administered topical ivermectin, injected ivermectin, or nothing (control group).

Based on the treatment success using the topical drug, they conducted large scale treatment trials in 2019 and 2020-21 at Seal Bay Conservation Park on South Australia’s Kangaroo Island. These trials were done to verify earlier results and determine whether the treatment of pups improved their overall survival.

The researchers found that optimal outcomes are achieved if pups are treated early, prior to the development of disease.

In addition to the extremely high effectiveness in treating hookworm infection, ivermectin was also found to be an effective lice-killer, reducing infestations by over 80 percent. Though not deadly, the lice that infest Australian sea lions are bloodsuckers, contributing to blood loss and anaemia (also an impact of hookworm).

When left untreated, hookworm burrow into the wall of the intestine where they cause blood loss, diarrhoea, and inflammation. The blood loss results in pups developing anaemia and low blood protein and is usually accompanied by weight loss and poor growth. In severe cases, when there are thousands of worms, blood loss can result in pups’ deaths. Indirectly, the weakness caused by blood loss makes the pups more vulnerable to trauma; trauma caused by other sea lions is the most common cause of death in Australian sea lion pups.

The Australian sea lion is the only pinniped species endemic to Australian waters, ranging from the Houtman Abrolhos Islands off the west coast of Western Australia to The Pages Islands in South Australia. The species is endangered, with a decreasing population trend (International Union for Conservation of Nature Red List) from a low baseline attributed to 19th century commercial sealing.

The disease pressures on the Australian sea lion (including hookworm) are exacerbated by its low reproductive rate. The majority (82 percent) of pup births occur in South Australia where there is dependence on just eight large breeding colonies, including Seal Bay and Kangaroo Island.

The current study is part of pioneering, ongoing research of the Australian sea lion by a group headed by Mr Lindsay’s supervisor, Dr Rachael Gray. The research commenced in 2006.

Ivermectin could help save the endangered Australian sea lion

Journal
International Journal for Parasitology
Funder
This study was funded by The Hermon Slade Foundation, and by the FS Quiney and BR Richards bequests (Sydney School of Veterinary Science, The University of Sydney).
DOI
10.1016/j.ijppaw.2021.11.002 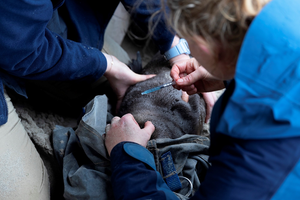 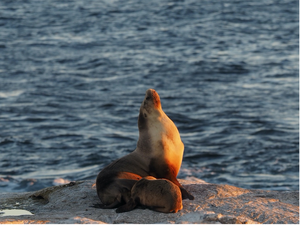